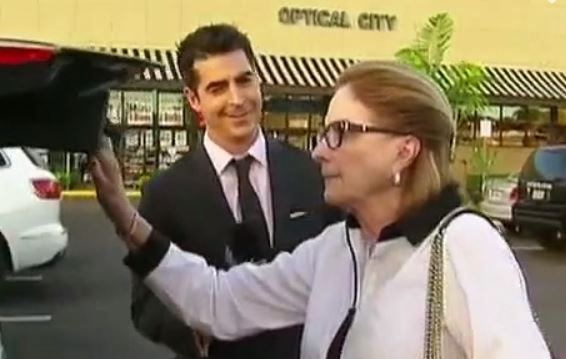 A Florida mayor whose city has sued a couple over Christmas lights was confronted by a Fox News reporter.

The city of Plantation is trying to shut down the display at Mark and Kathy Hyatt’s home, which has attracted lots of attention for being so colorful and unique.

Jesse Watters went to the home and spoke with the couple, and they indicated that the issue is money.

The Hyatts raise money from the display through donations for charity, with Mark indicating they’ve made about $10,000 over the years.

Asked what the city’s main beef with them is, Mark said: “You know, I’ve always thought it’s about money and I truly still believe that. They’re just not making money on this and they wanted money from us, and when we wouldn’t give it to them, all the sudden we’re in court.”

“They came to me and said you should charge to have people come in. Who would do that?” he added. “The city threatened and enforced $250 lien and there’s a lien against my house for $7,000, plus taxes, penalties, interest –I don’t even know how much it is today.”

Hyatt further noted that the mayor supported the light display when she was on the city council but “flip-flopped” when she became mayor.

So Watters approached the mayor, Diane Bendekovic, and asked her about it.

“Why are you suing a family for having Christmas lights?” he asked.

“You know as much as I’d like to comment, we’re in pending allegation right now,” she responded.

“Florida Bar Association says that you can comment during a proceeding as long as you don’t prejudice one side or the other,” Watters said. “don’t think Santa’s going to be very happy with you.”

“I don’t think you should be voicing your opinion on what Santa wants and doesn’t want,” the mayor said.

Watters later claimed that he was able to ascertain that “the mayor does not like this family” and indicated it might be because of political differences.

It might not be that simple, though. Neighbors have been complaining for years about the display, with WPTV reporting back in 2012 that “most of the people who live on their cul-de-sac” complain about the hundreds of cars that go to the display every night the lights are up. It said the city was trying to balance the complaints with restrictions on the display.

“I have a parade going through my neighborhood every night,” said Jean Sauleau, who lives across the street. “I love Christmas, I’m a Catholic. But it’s to the point where it’s not even about the decorations, it’s about how you treat your neighbors.”

“This is not the same as having a Christmas party where your street is blocked for two hours, this is ongoing for eight weeks,” added neighbor Adam Fractenberg. “It’s not an inconvenience, it’s a hazard. It’s great for everybody else in the community, except for those of us who live on the block.”

The city follows this line of thinking in the lawsuit, stating: “The nature and size of the Hyatt Extreme Christmas renders it incompatible with the limited access, single family residential neighborhood in which it is located.”

But the Hyatts have largely dismissed the concerns, reported CBS, insisting that it’s their right to have the display–which has more than 200,000 lights and decorations–in their yard.

“A lot of people support what we do and I really don’t think that the thousands and thousands of dollars that the city has spent to keep people from enjoying a tradition just doesn’t make any sense to me,” Hyatt said.