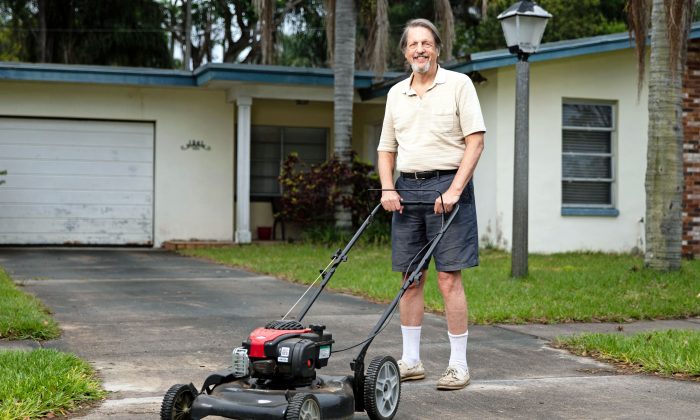 Dunedin resident Jim Ficken is suing the City of Dunedin for foreclosing his home because the grass was too tall. (Courtesy of the Institute for Justice)
US News

The condition of a West Florida man’s garden has sparked a legal battle with authorities that could result in him losing his home.

The city of Dunedin authorized the foreclosure of Jim Ficken’s home on May 7 after issuing almost $30,000 in fines to the man because the grass was too tall.

However, the 69-year-old man and national public interest law firm the Institute for Justice (IJ) hope they can stop the city from using heavy fines and foreclosures for minor city violations through legal action.

“No one should face crippling fines, let alone foreclosure, for trivial code violations,” Bargil said in a public statement. “Dunedin’s Code Enforcement Board operates like a nightmarish homeowners association, but as a public board, it cannot rule with an iron fist. Rather, it must abide by state laws, as well as the state and federal constitution.”

The city of Dunedin, FL authorized the foreclosure of Jim Fickens home. His crime? His grass was too long! Dunedin is attempting to collect nearly $30,000 in fines and taking his home to do it. We’re fighting these excessive fines and defending his home. https://t.co/oIJvB9VRMd

Bargil claims his client tried to resolve the matter privately but his request for a lighter fine or a new hearing were rejected.

“Now they are trying to take his home, but the amount of Jim’s fine is wildly out of proportion to the offense of having long grass,” Bargil said. “IJ will defend Jim’s constitutional right to be free from this excessive fine so that he can keep his home.”

The lawsuit has been filed in Pinellas County Court and argues the city fines violate the excessive fines clauses of the U.S. and Florida Constitutions.

Ficken claims he fell behind on his housekeeping duties when he left town to take care of his late mother’s estate. Although he had arranged for a friend to mow the grass, the friend died unexpectedly. Due to the tropical climate, grass grows very quickly, and Ficken’s lawn soon grew taller than 10 inches.

“Without so much as a phone call, the city then began assessing fines of $500 per day, every day,” IJ Senior Director of Communications Justin Wilson said in a public statement. “By the time he got back and became aware that he was being fined, the fines were already sky high and unpayable for someone like Jim who lives on a fixed income. A full timeline of events is available here.”

Florida man faces foreclosure and $30,000 in fines for having his grass too high. https://t.co/rT4vM7SVM0

IJ maintains the lawsuit is not just about Ficken, but is just one example of the city imposing heavy fines. It claims the city of Dunedin imposed a combined $34,000 in fines for code violations throughout the year 2007.

IJ previously won a unanimous U.S. Supreme Court decision that upheld the Eighth Amendment, which prohibits all levels of government, business and individuals from imposing excessive bail, fines, or cruel and unusual punishments, in any part of the United States, on U.S. property or against any U.S. citizen or resident of the United States.

The IJ in Timbs versus Indiana lawsuit ended with clarity over the Constitution’s ban on governments imposing excessive fines.

“While the High Court confirmed that the right to be free from overly burdensome fines applies to the states, the justices did not set a clear standard for when a fine becomes excessive,” Wilson said. “Legal tradition maintains that a person’s ability to pay a fine should be considered, yet today few government bodies consider the fairness of imposing large fines on Americans of limited means.”

“All over the country, citizens are being fined hundreds or thousands of dollars for minor violations and then threatened with the loss of their property or other serious consequences if they can’t pay up,” Ward said in a public statement. “The Founders knew that the government would always be tempted to levy outrageous penalties. It is past time for courts to give meaning to the Eighth Amendment’s prohibition on excessive fines.”