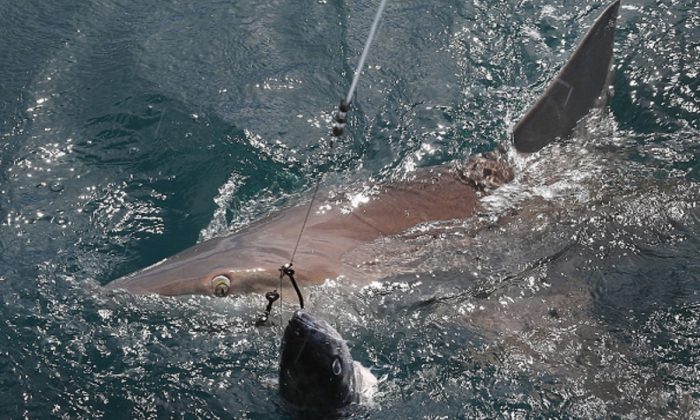 A 7-foot Sandbar shark is brought aboard the Striker 1 a few miles off the Miami Beach coast line in Miami, Florida,on July 14, 2017. (Joe Raedle/Getty Images)
US News

TAMPA, Fla.—A Florida man has pleaded guilty in connection to a video of a shark being dragged behind a speeding boat.

The video was accompanied by a highly graphic photograph showing what appears to be the same shark torn to shreds.

As the video spread through social media during the summer, it generated disgust amongst users, including shark fishermen, and was referred to the Florida Wildlife Commission (FWC) by a celebrity shark fisherman.

Michael Wenzel, 22, pleaded guilty Thursday to charges of misdemeanor animal cruelty and using an illegal method to catch a shark. He was sentenced to 10 days in jail and 11 months’ probation.

A Florida man has pleaded guilty in connection to a video of a shark being dragged behind a speeding boat. https://t.co/zEI1hIvuhJ

A second man charged in the case is awaiting trial. Charges were dropped against a third man arrested after the video surfaced in 2017.

In the video, a group of men laugh as they drag a shark by a rope behind a boat.

Wenzel also must serve 100 hours of community service. Prosecutors asked for half those hours to be served at an animal shelter.

The Florida Wildlife Commission (FWC) said it had carried out “exhaustive research” into the suspects’ social media activity, done numerous interviews and consulted with many shark experts.

“As we’ve said since this video and other images came to light, these actions have no place in Florida, where we treasure and conserve our natural resources for everyone,” said Commission Chairman Bo Rivard. “It is our hope these charges will send a clear message to others that this kind of behavior involving our fish and wildlife will not be tolerated.”