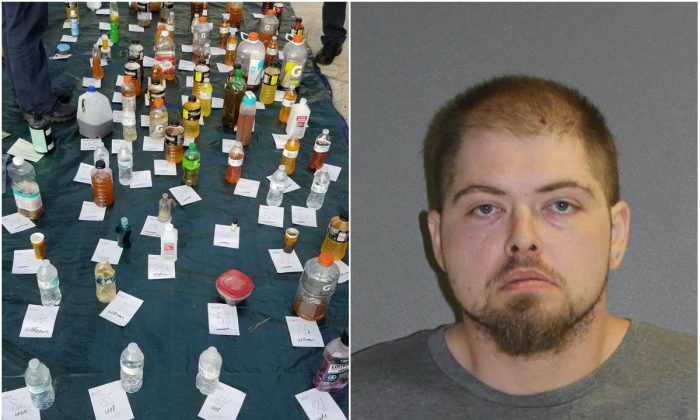 A 31-year-old Florida man built multiple explosive devices and came close to creating a bomb of significant explosive power with an intent to use it, police said.

Christopher Langer, a heroin addict with a rap sheet of petty crime, collected a cornucopia of bomb-making materials and used them to make at least three explosive devices in his parents’ home in DeBary, Florida.

“A search warrant resulted in the discovery of an estimated 200 containers inside the house containing unknown powders, acids and other materials,” the Volusia County Sheriff’s Office stated on Facebook.

“The suspect had everything he needed to cause significant destruction and loss of life, and an apparent desire to do so,” the office stated in another post.

Volusia County sheriff’s deputies came to Langer’s home on Sunday, Nov. 12, around 4:11 p.m. in response to a domestic disturbance call.

An intoxicated Langer had an argument with his parents, during which he said he had “put an explosive substance inside a grenade,” authorities say.

At first, he denied to the deputies there was a grenade, but then “acknowledged he had thrown it outside, and he offered to show the deputy where it was,” the sheriff’s office stated. “Upon searching the area, the deputy found a metal pineapple-style grenade with a paperclip in place to hold the lever and keep it from exploding.”

Deputies evacuated the house, got a search warrant, and, with the help of a bomb squad, spent the night sorting through the array of chemicals and other bomb-making equipment in Langer’s room.

It was not a pleasant job.

While the house was in good shape, Langer’s room was a mess.

“If I was a roach, I wouldn’t live in that room,” said Volusia County Sheriff Mike Chitwood, according to ClickOrlando.com. “That’s how despicable and dirty and and feces- and urine-filled that room is.”

The authorities used a bomb robot to examine a hole in the backyard, where they discovered a small explosive device. Another possible explosive device was set up as a booby trap inside a SpongeBob SquarePants lunchbox.

Among the chemicals, authorities found nitric acid and urea, the ingredients for a urea nitrate explosive, like what was used in the 1993 World Trade Center bombing. Langer also kept multiple bottles of urine, which can be used to make urea.

This wasn’t the first time deputies received a 911 call from Langer’s home.

On Oct. 25, his mother called after she found her son gasping for air. Langer had overdosed on heroin, and police used two Narcan doses to revive him.

Chitwood described Langer as a heroin addict who was against the government to the point that he wanted to “get even” by harming first responders.

Langer’s Facebook page doesn’t have any posts since 2014. Earlier posts consist of inspirational quotes, as well as anti-establishment and anarchist memes.

“Two weeks ago we saved your … life, and now we’re here two weeks later and you’re talking about how you want to blow us all up,” Chitwood said.

Chitwood said Langer wasn’t a convicted felon and it was thus legal for him to possess many of the items police found. He went too far, however, by making the bombs. Langer has been charged with making or possessing a destructive device and has been detained at the Volusia County Branch Jail.

Langer has been charged with making or possessing a destructive device and has been detained at the Volusia County Branch Jail.

He’s been to jail at least six times since 2010, online records show, for minor drug-related offenses, theft, and dealing in stolen property.

The following are his booking pictures from each arrest: