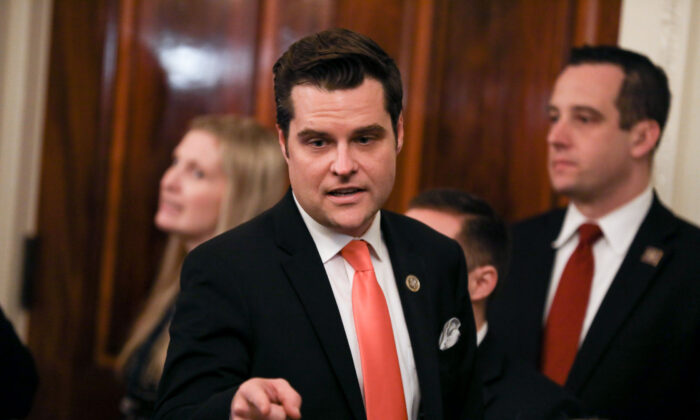 Rep. Matt Gaetz (R-Fla.) in the East Room of the White House in Washington on Feb. 6, 2020. (Charlotte Cuthbertson/The Epoch Times)
Crime and Incidents

One of the men who Rep. Matt Gaetz (R-Fla.) accused of masterminding a plot to extort $25 million from Gaetz’s family in exchange for having a federal probe into sex trafficking allegations against the lawmaker go away was charged with wire fraud on Tuesday.

Stephen Alford, 62, was indicted by a federal grand jury in Pensacola, Florida, on charges of wire fraud and attempting to stop authorities from viewing his iPhone.

The indictment, which doesn’t name the victims or other alleged participants, said that Alford was behind an elaborate plot to extort get $25 million from a person identified only as “D.G.” In exchange, the 62-year-old promised he could get a presidential pardon from then-President Donald Trump for a family member, as well as fund the release of someone identified only as “R.L.”

It states that Alford’s “’team had been assured by the President’ that he will ‘strongly consider’ a ‘Presidential Pardon’ or ‘instruct the Department of Justice to terminate any and all investigations involving’” an unnamed individual.

It comes after Gaetz, who represents parts of western Florida, was accused of having a sexual relationship with a 17-year-old girl, paid for her to travel with him, and possibly violated sex trafficking laws, according to a New York Times report that cited three unnamed sources who were “briefed on the matter.”

The second-term Florida congressman in April denied all the allegations and said he and his family were being targeted for extortion.

“Over the past several weeks, my family and I have been victims of organized criminal extortion involving a former DOJ official seeking $25 million while threatening to smear my name. We have been cooperating with federal authorities in this matter and my father has even been wearing a wire at the FBI’s direction to catch these criminals,” said Gaetz in a press statement at the time.

Gaetz’s father is Don Gaetz, a former president of the Florida Senate. Others who approached Don Gaetz have said in news reports that they wanted the money to free Robert Levinson, a former FBI agent who disappeared in Iran more than a decade ago.

Alford made his first appearance in court on Tuesday, a Department of Justice news release said on Tuesday. The 62-year-old faces up to 25 years imprisonment if convicted.

The Epoch Times has contacted a representative for Matt Gaetz for comment.

“They tried to extort me on a pile of lies,” he wrote on Twitter after the Justice Department announced Alford’s arrest. “Alford wasn’t acting alone—he had help from people with strong ties to the federal government. There is much more to this attempt to destroy me.”