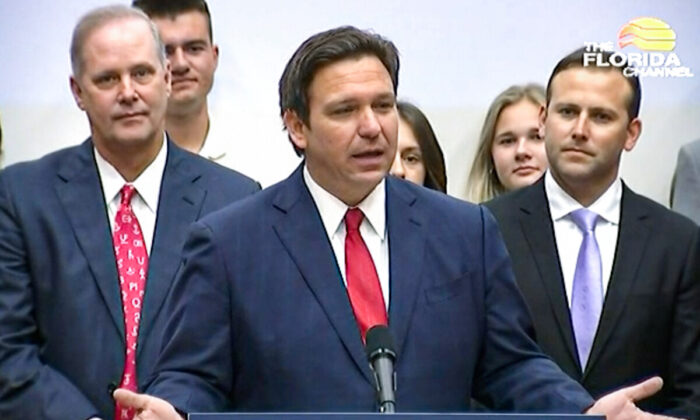 Florida Gov. Ron DeSantis holds press conference in The Villages and signs SB 7044 on April 19, 2022. (The Florida Channel/Screenshot via The Epoch Times)
US

The Republican-controlled Senate voted 30-9 on May 24 for the property insurance bill SB-2-D and SB-4-D sponsored by Republican State Sen. Jim Boyd in the hope of lessening the upfront insurance costs for homeowners by lowering premiums and addressing roof repairs. Rep. Jay Trumbull sponsored the House versions HB 1D and HB 3D that passed 95-14 on May 25.  Supporters said that it was a good “first step” in an effort to “stabilize the market” and attract insurance carriers back to Florida. Both Chambers signed their respective bills on May 25 and sent it to the governor’s office on May 26.

“The bill before us isn’t perfect and doesn’t purport to answer every question or solve every problem but offers a balanced solution,” Trumbull said during the House hearing. “It’s a bill that fights fraud without disenfranchising consumers. It helps Florida’s domestic insurance companies without rewarding corporate mismanagement. It’s a bill that provides help for homeowners without endangering the stability of the insurance market.”

Opponents of the bill said it only “bails out the industry” without providing relief to homeowners from high premiums and canceled policies throughout the state.

“This is a milquetoast attempt at reform that fails to live up to the urgency of our moment,” said Democratic Rep. Andrew Learned, at a press conference after the vote. “This is a tiptoe in the right direction but make no mistake–this bill will not result in lower premiums. It will not prevent more Floridians from having their coverage drop when their insurance company goes under. And it won’t change the underlying problem that storms are becoming more frequent and more severe because of climate change.”

In the bill is an extra $2 billion in reimbursements for reinsurance to assist policyholders for insurers to purchase insurance to help protect themselves from risk due to hurricane losses, which would allow insurers to participate in the Hurricane Catastrophe Fund before reaching the maximum claim payout. However, in order for an insurer to participate in the program it would have to reduce policy rates.

Florida has on record approximately seven million homeowners who have continued to see their homeowners insurance rates double. The governor called a special session to address the issue that could help bring savings to homeowners but there were no guarantees it would work.

The bills would prohibit insurers from denying coverage because of the age of a roof, if it is less than 15 years old.  If the roof is older, homeowners would be allowed to obtain an inspection before they are denied coverage from an insurer.  If the inspection finds that there are five years of life left, insurers cannot refuse to issue a policy solely based on the roof’s age under the proposed legislation.  In addition, if the roof has 25 percent or more of damage, but complies with building codes, it will only have to be repaired instead of being replaced under the building codes exemption that is created by the proposed legislation.

An additional measure would allow grants up to $10,000 to retrofit homes so they are less susceptible to hurricane damage. In order to qualify, the property would have to have an insured value of $500,000 or less, be homesteaded, built before 2008, and in an area where wind speed from storms can exceed 140 mph. Property owners would obtain $2 from the state for every dollar they invest in mitigation improvements.

Attorney fees are also limited in insurance-related cases, which some of the bill’s supporters say accounted for nine percent of all insurance claims filed nationally but almost 80 percent of all the property lawsuits.

The proposed legislation will allow for more “state oversight” so regulators can “spot trends, analyze reasons, and try to prevent future failure of insurers.”

DeSantis’s proclamation for calling legislators back to Tallahassee said that since 2021, the insurance industry has had two years of underwriting losses that exceeded one billion each year and many insurance companies have either gone “insolvent, required midterm cancelations, are in liquidation, or have stopped writing new business.

Lawmakers also reached an agreement to include in the legislative package a measure to require that all condominiums more than three stories high have periodic inspections of their structural integrity–statewide. This comes after the condominium collapse in Surfside that killed 98 people in June 2021.

Florida Gulf Coast University Professor of Economics Shelton Weeks told The Epoch Times that the insurance debacle didn’t “manifest” in the past few months because businesses, even insurance companies “must make a profit to stay in business.”

“This didn’t just start yesterday,” Weeks said. “It’s been building and it’s one where we need not a patch; we need a long-term solution.”

In the summer of 2004, four strong hurricanes and one tropical storm hit Florida, resulting in massive property losses and putting a great strain on insurance companies.  In 2006, a newly elected Gov. Charlie Crist and the legislature changed the property insurance laws constricting premiums that homeowners would pay to insurance companies.

Weeks said that in the business world, a business is expected to make profits. And there are a lot of profits to be made in the insurance industry.

“If we want to have these financial services here—insurance in our state—we’ve got to make sure that it is an environment that is friendly to their business model,” he said. “That doesn’t mean we have to give the state away to them, we just have to give them opportunity.”

Weeks said that insurance companies look at Florida in terms of “risk-return trade-off” and know that if Florida “does business correctly, those companies can be profitable operating in Florida.”

Another area of concern for the legislature that has caused a major shift in insurance companies raising rates and pulling out of the state altogether is “fraudulent roof claims.”

Weeks said he was offered a “free roof,” from a reputable roofing company, but he did not “take the bait.”

“Nothing is for free,” he said. “Following (Hurricane) Irma, every other advertisement on television was a roofing company telling you that you needed to hurry and get your roof, and they would use the term—at no cost to you. The cost to all us now is the situation that we’re in.”

Weeks said the roof claims are “what got us here” and that was the main driver of the rate hikes because of “unscrupulous roofing contractors.”

Another portion of the bill would be to establish a temporary reinsurance fund that would depend on $2 billion in taxpayer money. Other changes call for restricting lawsuits filed against insurance companies while hindering insurers from refusing to renew or offer policies to homeowners with roofs that are less than 15 years old.

Weeks explained that reinsurance is simply “insurance for insurance companies.”

“In coastal areas, they look at that and say ‘Geez you know, if we get another Category five hurricane coming through here, that could wipe us out,’” he said. “So, they buy insurance to cover that risk.”

Weeks said that the good news in all of this is that the problem has been on “everybody’s radar for a while” and we have at least had conversations about it.

“The governor didn’t just wake up out of the blue and say ‘hey, we need to fix this,’” Weeks quipped. “They’ve known that this is a serious issue. They (legislators), I guarantee you, know somebody that’s been canceled. I mean, I was canceled.”

Florida lawmakers returned to Tallahassee on May 23 at the request of DeSantis who had called them back by proclamation on April 19, in order to address a troubled insurance market in the regular session that ended in March. Florida homeowners have been plagued by high rates, policy cancellations and insurance companies folding or moving out of the state leaving homeowners vulnerable as they face an upcoming hurricane season that begins on June 1.