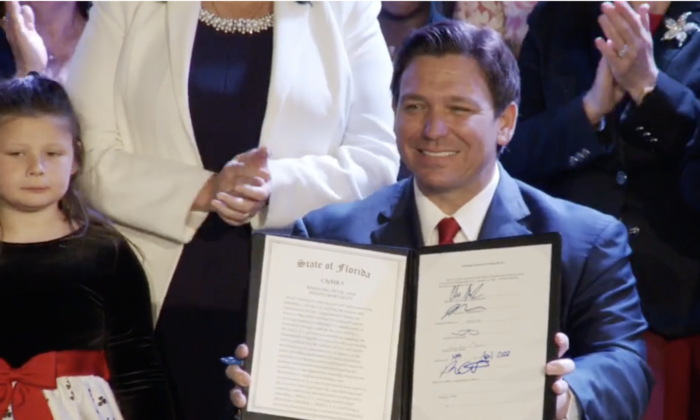 Leon Circuit Judge John Cooper ruled on June 30 that the new law signed by DeSantis in April was “unconstitutional” and that it was “temporarily delayed,” but would only take effect after he “issued a written order”—meaning it could still take effect on July 1.

“We knew that was likely going to be what was decided in that case,” the governor said at a June 30 press conference in Sanford. “It was not, of course, something that we were happy to see.”

Shortly, after the legislation was signed into law, attorneys for the ACLU and Planned Parenthood sued to stop the law and asked the court for an injunction.

They argued the law violates the right to privacy provided in the state’s constitution which was approved by the voters in 1980.

In the past, court cases have affirmed the right of privacy extended to a woman’s right to obtain an abortion.

Staff attorney for the ACLU Reproductive Freedom Project, Whitney White said Florida’s 15-week ban would “force people to carry pregnancies against their will.”

“This ban defies the will of the people and rights that Floridians have relied on for decades,” she said in a released statement.

“Everyone deserves the ability to access the abortion care they need and we’ll continue fighting for that right with every tool at our disposal.”

Alexis McGill Johnson, president and CEO of Planned Parenthood Federation of America, said there is a “glimmer of hope for abortion access” in Florida.

“This decision could not come at a more crucial time, she said in a released statement. “As abortion bans ripple across the country Floridians need to be able to access care at home.”

Stephanie Fraim, president and CEO of Planned Parenthood of Southwest and Central Florida said that abortion bans are “dangerous.”

“We are grateful this court recognized that it is an unconstitutional intrusion on our patients’ and providers’ medical decisions,” she told The Epoch Times in an emailed statement.

“Once the ban is blocked, Florida abortion providers will be able to offer patients who decide to have an abortion the care they need here at home.”

Under the new law that was to go into effect on July 1 abortion providers would face fines, imprisonment, and the loss of their medical license.

The plaintiffs’ witness testified that the restrictions could interfere with the bond between a patient and their physician and their ability to provide the “best medical course of action.”

The state argued that it would have a minimum impact since more than 96 percent of abortions occur before 15 weeks and nothing in the law would prevent a woman from getting an abortion early.

In fact, they said in court, “it would probably motivate women to seek abortions earlier.”

Also, the state said it had a “compelling interest” to limit abortions because of the “risk, mortality, and mental health of the mother.”

Additionally, the fetus has the “potential to feel pain after 15 weeks.”

Cooper’s decision comes one week after the U.S. Supreme Court overturned the 50-year-old national right to abortion law Roe v. Wade, putting the decision of abortion rights back to the states.

DeSantis went on to say that the state would continue to fight for the unborn through “continuing the legal battle.”

“These are unborn babies that have a heartbeat, they can feel pain, they can suck their thumb and to say that the state constitution mandates things like dismemberment abortions, I just don’t think that’s proper,” he said.