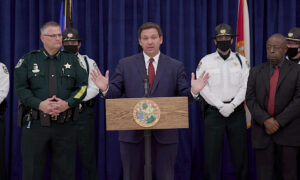 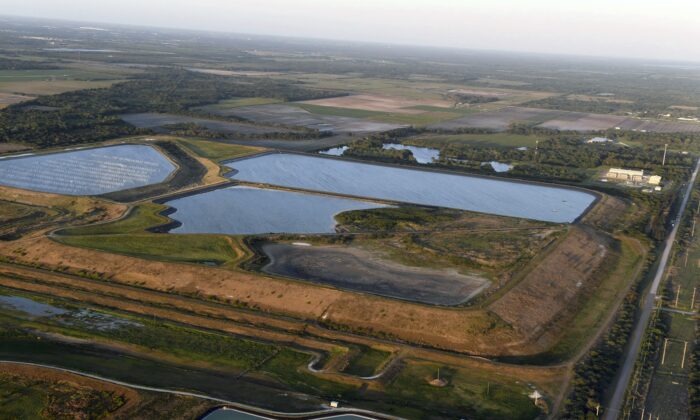 A reservoir near the old Piney Point phosphate mine, in Bradenton, Fla., on April 3, 2021. (Tiffany Tompkins/The Bradenton Herald via AP)
US News

A Florida jail was evacuated over the weekend amid concerns of potentially “catastrophic flooding” after a reservoir leak was discovered near a containment area in Manatee County.

Manatee County Jail public information officer Randy Warren told news outlets that 345 inmates will be taken to “an undisclosed secure location in order to free up bed space for the remaining 721 inmates on the upper level of the Manatee Jail.”

Details about where they will be housed weren’t provided due to security concerns.

“[Manatee Sheriff Rick] Wells and staff are still in constant communication with officials on the situation. We aren’t expecting more than a foot of water on jail property, in the worst-case scenario,” Warren told NewsChannel8.

Meanwhile, Acting Manatee County Administrator Scott Hopes told reporters at an April 4 news conference that officials “moved the medical unit and all personnel to the second floor, which puts them well over 10 feet above the base level.” But those plans were scrapped and Wells ordered the inmates be bused to another location, Warren told the Bradenton Herald.

Florida Gov. Ron DeSantis on April 4 declared a state of emergency as county officials evacuated residents near a phosphate processing plant over the weekend. Officials warned that a pond filled with toxic wastewater could collapse “at any time.”

“A portion of the containment wall at the leak site shifted laterally,” Manatee County Public Safety Director Jake Saur told WSTP after a “significant leak” was discovered at the Piney Point processing plant. Saur further cautioned that “structural collapse could occur at any time.”

The sheriff’s office expects up to one foot of floodwater in the vicinity of the jail should the Piney Point site be breached.

“The reasoning for that is just to create better security for us within the facility on the upper level and to give us enough bed space for the remaining 721 inmates,” Warren told the Herald.

The main concern regarding Piney Point is the amount of phosphogypsum, which is “radioactive waste” in the pond from processing phosphate into a state that it can be used for commercial fertilizer, according to the Center for Biological Diversity.

The water being pumped out of the site is a mix of seawater, rain runoff, and stormwater, state and county officials said.

“The water meets water quality standards for marine waters with the exception of pH, total phosphorus, total nitrogen, and total ammonia nitrogen,” the state said in a statement. “It is slightly acidic, but not at a level that is expected to be a concern, nor is it expected to be toxic.”