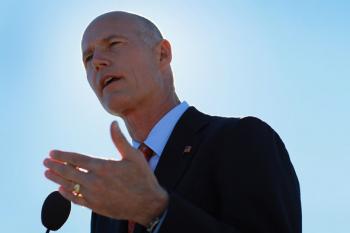 Florida Governor-elect Rick Scott speaks at a press conference on the Port of Miami on December 8, 2010 in Miami, Florida. Scott announced on Feb. 16 that after careful consideration he has decided to reject President Obama's plan for a high-speed rail project that would link Tampa to Orlando. (Joe Raedle/Getty Images)
US

This week, the president proposed his budget for 2012. In the budget, a $50 billion upfront investment in infrastructure that included high-speed rail was announced. The president unveiled his budget at the Parkville Middle School and Center for Technology in Baltimore, Md. He said, ‘I’ve talked about the need to invest in high-speed rail and high-speed Internet, so that companies can move goods and information faster than ever.”

Republicans have expressed disappointment in the proposed budget. GOP Budget Chairman Paul Ryan (R-Wis.) said during a press conference, “It would be better if we did nothing than pass this budget.”

Last month, the president announced that the U.S. Department of Transportation (USDOT) was awarding $8 billion to states across the country.

“The president’s bold vision for high-speed rail is a game changer,” said Transportation Secretary Ray LaHood. “It’s not only going to create good jobs and reinvigorate our manufacturing base, it’s also going to reduce our dependence on fossil fuels and help create livable communities. I have no doubt that building the next generation of rail service in this country will help change our society for the better.”

In a letter from Scott to Transportation Secretary LaHood, Scott wrote, “I believe that the dollars being made available for proposed high-speed rail projects are better invested in higher yield projects.” Both in his letter and in a press release from his office, Scott outlined his reasons for the rejecting the money. First, he stated that the project could, “Put Florida taxpayers on the hook for an additional $3 billion.” Secondly, he stated that statistically revenue from rail ridership is often overstated and that revenues from passengers may not cover operating expenses. Finally, his concern was that if the project proved to be too costly and was shut down Florida would have to return the $2.4 billion in federal funds to Washington.

“As you know, my background is in business, not politics. But you don’t have to be an economics expert to understand that if you spend more money than you take in, your business will fail.” He continued, “Let us never forget, whether it is Washington or Tallahassee, government has no resources of its own. Government can only give to us what it has previously taken from us. That is why today I am announcing my decision to reject the Obama administration’s plan to partially fund the costly Tampa to Orlando high-speed rail project.”

Scott's predecessor, Gov. Charlie Crist, had advocated for high-speed rail in Florida and lobbied to get the federal funds. Crist was also a Republican, but a moderate one who wound up leaving the party. He ran for senator as an Independent, but was defeated by Marco Rubio in the 2010 elections.

The awards from the Department of Transportation were granted to 31 states across the country.