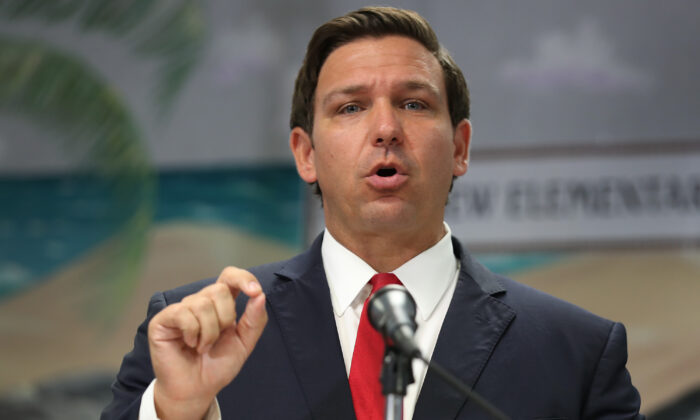 “When I took office, I made a pledge to the citizens of Florida to overhaul our educational standards to remove all vestiges of Common Core and return to the basics of reading, writing, and arithmetic,” DeSantis said in a release. “I am pleased that this historic task has been completed and we are well on our way to making Florida the best state in the nation for education.”

The standards establish what students need to learn by the end of each grade, from kindergarten to the end of high school. DeSantis issued an executive order a year ago to scrap Common Core and “ensure we return to the basics of reading, writing, and arithmetic.”

Common Core was developed in 2009 by the Council of Chief State School Officers and the National Governors Association, with heavy input from people working for standardized testing companies such as College Board (which develops the SAT tests) and ACT (which develops the ACT tests). The standards were supposed to ensure “college- and career-readiness.”

At about the same time, the Obama administration promised over $4 billion in grants to states that adopted “college- and career-ready” academic standards. Florida was one of the greatest beneficiaries, getting about $700 million. But adoption and maintenance of the standards and the related testing regimens ultimately cost states billions more.

Common Core was criticized for being poorly written, untested, and not rigorous enough. Some have also said that the standards had a leftist ideological bent.

“They not only incorporate civics throughout every grade, a first of their kind in the nation, ensuring that our students are well versed in the United States Constitution and the responsibilities of citizenship, they also provide educators with clear and concise standards,” he said in the release.

The standards are supposed to be released this week.

One point of the new standards was the elimination of “Confusing/Crazy Math,” says a fact sheet released by the state. Common Core-aligned curricula has often been mocked for teaching math in a confusing way that’s incomprehensible to parents. It focused, for example, on having children in early grades explain how they arrived at their answers of simple arithmetic problems.

“When you’re trying to remember what’s four times four, and you have to think about it and it’s not automatic, you’re never going to be able to conquer algebra and all those other courses,” he said during a Jan. 24 press conference with DeSantis, Tampa Bay Times reported.

In English, learning will be framed around “classic literature and primary source material.” American history and civics will be interspersed into all grade levels, rather than having civics typically in 7th grade, American history in 11th grade, and U.S. government in 12th. Rhetorics class will be moved from 9th to 6th grade and all high school students will also receive financial literacy lessons.

The standards will also de-emphasize standardized testing, although most changes to testing regimes would require legislative approval.