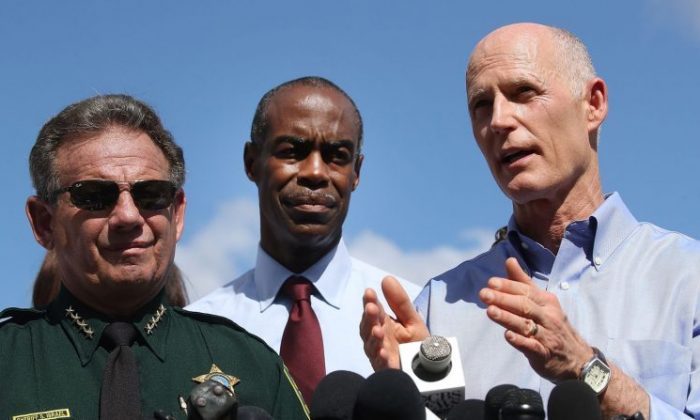 “We constantly promote ‘see something, say something,’ and a courageous person did just that to the FBI. And the FBI failed to act,” Scott said in a statement, according to the New York Post.

“Seventeen innocent people are dead and acknowledging a mistake isn’t going to cut it,” Scott added. “An apology will never bring these 17 Floridians back to life or comfort the families who are in pain.”

A person close to Cruz called the FBI tipline a month ago and reported that the 19-year-old had a “desire to kill people” and that there was  “potential of him conducting a school shooting.” The agency failed to pass the ominous tip to the Miami field office.

Wray issued an apology after the tragic error came to light.

“[We] deeply regret the additional pain this causes all those affected by this horrific tragedy,” Wray said, saying that an investigation will be conducted.

Attorney General Jeff Sessions also ordered an investigation of the FBI’s handling of the tip, saying in a statement that “warning signs were there and tips to the FBI were missed.”

“The FBI in conjunction with our state and local partners must act flawlessly to prevent all attacks. This is imperative, and we must do better,” Sessions said. “We will make this a top priority.”

Sessions also said that every person is responsible for reporting warning sign to law enforcement.

“Do not assume someone else will step up–all of us must be vigilant,” Sessions said. “Our children’s lives depend on it.”

According to a Justice Department statement, the FBI has 250 personnel dedicated to investigating the Florida shooting in addition to teams from a range of other agencies.

The tip which the FBI missed was not the only warning sign. New York Post reported on Friday that deputies were called to Cruz’s address 39 times. Five months before the shooting, the FBI also received a tip about a YouTube user with the same name as Cruz who left a comment saying “I’m going to be a professional school shooter.”