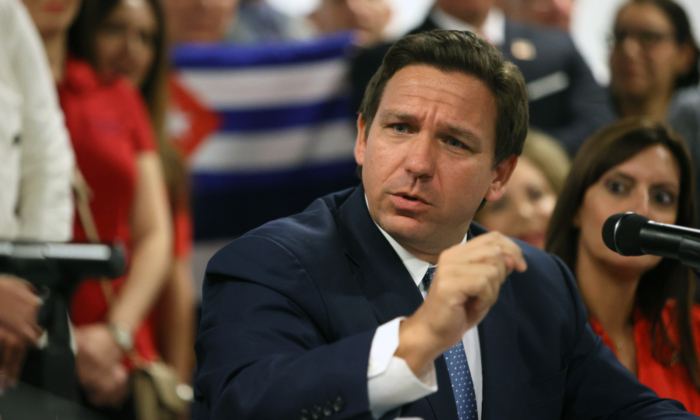 The move follows a series of COVID-19 vaccine mandates imposed by the administration of President Joe Biden. That doesn’t sit well with the Florida governor, who has “had enough” of federal interference into state business, press secretary Christina Pushaw told The Epoch Times.

The legislative proposals include the provision of reemployment assistance to people who are fired due to failure to comply with an employer’s vaccine mandate. Under another proposal, Floridians who have an adverse reaction to a vaccine would be eligible for workers’ compensation.

Employers who fire workers solely based on the vaccine mandate would be prohibited from enforcing non-compete agreements against the employees, according to another proposal. Another provision would require employers to provide and religious and health exemptions to vaccine mandates. Meanwhile, companies that fail to notify employees about the exemptions would be liable to lawsuits by fired employees.

Biden last month ordered the Occupational Safety and Health Administration (OSHA) to create a rule to require all private employers with 100 or more employees to mandate vaccines or require them to submit to weekly COVID-19 testing. The rule could affect nearly 80 million workers according to administration officials, while businesses could face fines up to $14,000 per violation.

Although the rule isn’t yet in effect, a large number of private companies have mandated vaccines for their employees in anticipation of the rule.

According to Charlotte County attorney Charles Heekin, the Florida Legislature could address the vaccine mandate by building on the right-to-work protection in the state’s Constitution.

Florida is an at-will employment state. Employers can fire, demote, hire, promote, and discipline employees for almost any reason, or no reason at all. As a result, the strongest recourse for private company vaccine mandates is through legislative action.

In April, DeSantis signed an executive order banning vaccine passports in the Sunshine State. In May, he signed a bill into law codifying the ban. The law (pdf) prohibits businesses from requiring customers to prove their vaccination status, and also prohibits government entities in Florida from issuing such documents.

“In Florida, your personal choice regarding vaccinations will be protected and no business or government entity will be able to deny you services based on your decision,” DeSantis said in May, before he signed the bill into law.

Republicans in Texas, Wyoming, and Nebraska are considering statewide laws against vaccine mandates.

A special session in Texas wrapped up without a vote on a bill backed by Republican Gov. Greg Abbott that would counter the vaccine mandate.

Lawmakers in Wyoming will hold a special session next week to consider bills to block vaccine mandates.

In Nebraska, Republicans need more votes to trigger a special session to consider similar bills. In a statement, the senators say there is a “growing concern that employers will require their employees to choose between their jobs or being vaccinated without regard to their good faith personal objections.”