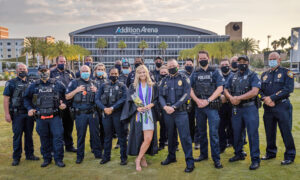 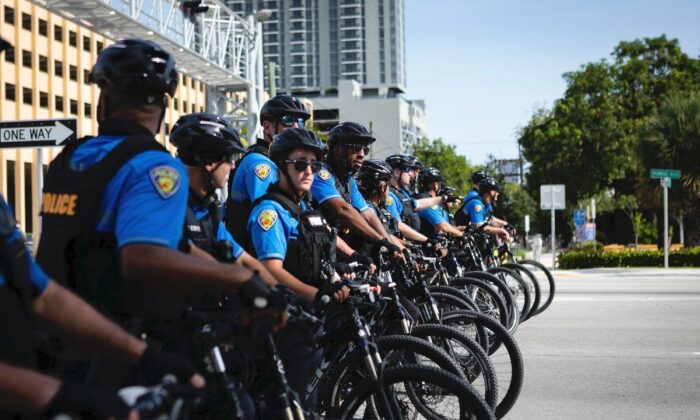 A row of police cyclists is seen during a rally in Fort Lauderdale, Florida on May 31, 2020. (Eva Marie Uzcategui/AFP via Getty Images)
Florida

PUNTA GORDA, Fla. – In a crowded auditorium in Indianapolis, Ind. late on Aug. 17, Florida Governor Ron DeSantis announced he would be asking the state legislature for $5 million to aid law enforcement agencies with recruiting efforts.

DeSantis announced three proposals that he said he would present to the next session of the Florida Legislature to help the law enforcement community attract qualified candidates and help recruit new talent.

“As so many cities and states choose to disrespect, degrade and defund the honorable work of law enforcement, we want Florida to continue valuing our men and women of law enforcement today, tomorrow and for generations to come,” DeSantis announced to the crowd.

The three areas DeSantis was referring to was new officer sign on bonuses, academy scholarships and out of state relocation support.

DeSantis plans to ask the legislature for $5 million for the academy scholarship program created through the Department of Education. It will provide for additional resources for law enforcement academy enrolees. It will be on a first-come, first served basis.

For new officer sign on bonuses, the payment of $5,000 is a one-time payment to officers who are new to the profession in Florida. Eligible candidates to receive this bonus are those who have no prior employment with the state of Florida in a law enforcement, correction or other institutional security officer positions. However, one year of employment is required. If the candidate leaves before one year of service has been completed, the funds will have to be paid back to the state.

Lee County Florida is a city with approximately 700,000 residents of which the sheriff’s department currently has 1,600 law enforcement personnel and civilian staff.

Lee County Sheriff Carmine Marceno is pleased with the governor’s push to attract qualified law enforcement personnel to the state and to his area as well. Currently the sheriff has a recruitment commercial that has gotten a lot of attention. He asks the viewer, “Do You Have What It Takes?”

“I fully support this legislative initiative that will provide continued support for law enforcement across the state,” Marceno said.

In Southwest Florida people are attracted to the lifestyle and, according to Marceno, have worked all their lives to retire to a place that respects law and order.

“They deserve a safe community,” he said. “The people of this county are my boss; I work for them.”

DO YOU HAVE WHAT IT TAKES?

If you have what it takes to be a law enforcement officer, join our family at the Lee County Sheriff’s Office.

During winter months the area attracts retirees because of the milder climate it offers. Marceno estimates during winter approximately 1.3 million people reside in Lee County and approximately 904 people move to Florida on a daily basis. In addition to protecting this many citizens, Marceno said there is 460 square miles of shoreline to protect as well.

“People want to be here,” he said. “They deserve a safe community.”

Marceno said the governor’s efforts are much appreciated and will help attract new talent and talent that wants to “get back in the game.”

“We have a great governor that backs law enforcement and gives them support at every level,” he said.

The sheriff said he is “looking forward” to the governor’s efforts to recruit talent statewide which allows him to pick the “best of the best.”

The announcement came at the 2021 Biennial National Conference and Expo hosted by the National Fraternal Order of Police where DeSantis was a guest speaker.