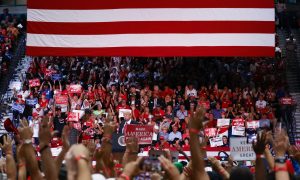 Newly sworn-in Gov. Ron DeSantis speaks as his wife, Casey DeSantis, stands near him at the Freedom Tower where he appointed Barbara Lagoa to the Florida Supreme Court in Miami, Fla., on Jan. 09, 2019. (Joe Raedle/Getty Images)
Politics

Florida’s DeSantis Getting Right to Work After Inauguration as Governor

Ron DeSantis has wasted no time toward putting his agenda in place since being sworn into office Jan. 8 as Florida’s 46th governor.

“The pomp and circumstance is fine,” DeSantis, a Republican and former U.S. representative, said of his inauguration, “but ultimately this is about putting the pedal to the metal.”

DeSantis succeeds Rick Scott, the Republican former governor who is now serving in the U.S. Senate. Both DeSantis and Scott were elected in November 2018 in extremely close races, which required mandatory recounts.

President Donald Trump endorsed DeSantis and by all accounts, helped the junior congressman become the chief executive of the nation’s third-most populous state. Florida will be critically important for Trump’s 2020 re-election bid.

“Ron DeSantis showed great courage in his hard-fought campaign to become the Governor of Florida. Congratulations to Ron and family!” Trump said in a Twitter post dated Nov. 7.

The state’s Supreme Court may be considered a top prize from the divisive gubernatorial election that pitted DeSantis against Tallahassee Mayor Andrew Gillum, a progressive Democrat backed by billionaire activist George Soros.

The seven-member high court has been home to left-leaning justices for years. Consequently, the court served as a roadblock to legislation emanating from the Republican-controlled state legislature. But with three liberal justices set to retire by law this week, DeSantis has the opportunity to decisively shift the court to the political right.

“Both the executive and the legislative branches in Florida have had a lot of frustration with that third branch of government—the judiciary—constantly usurping more and more legislative power over the years. Well, that ends tomorrow,” DeSantis said Jan. 7.

DeSantis, a Harvard law school graduate, claimed to have interviewed all 11 judicial finalists selected by a state nominating commission. “I say to you: Judicial activism ends, right here and right now,” he said in his inaugural speech.

DeSantis made good on that promise Jan. 9, appointing Third District Court of Appeals Judge Barbara Lagoa, a conservative and the first Hispanic woman judge in the Sunshine State’s history, to serve on the state supreme court. Lagoa’s appointment was effective immediately.

“Justice Lagoa’s proven commitment to upholding the rule of law, unparalleled legal career, and vast experience on the appellate bench, distinguish her among the most qualified individuals to serve on our state’s highest court,” DeSantis said in a statement.

After officially taking office, DeSantis returned to the governor’s mansion to attend the scheduled baptism of his 9-month-old son. He then issued two executive orders: one upholding the state’s non-discrimination policy for government workers and applicants for government contracts, and another to continue the state’s Office of Open Government, which provides access to government records.

DeSantis was plagued by accusations of racism on the campaign trail, due to his close ties to President Trump, who is often accused of bigotry. DeSantis was also lambasted for using a colloquialism to explain the danger of putting Florida’s economy in the hands of Gillum, who hails from the Bernie Sanders and Alexandria Ocasio-Cortez wing of the Democratic Party.

“He is the most liberal candidate the Democratic Party has ever nominated in the state of Florida,” DeSantis said of Gillum, an African-American, during a Fox Business interview. He then urged voters not to “monkey this up.”

DeSantis’s first executive order, 19-10, was in many ways an attempt to clear the air. His first official act as governor was to prohibit discrimination based on age, sex, race, religion, national origin, marital status, and disability.

However, an activist group called Equality Florida has since attacked DeSantis for not expressly including gay people.

“Equality Florida is deeply disappointed to see that LGBTQ employees and contractors have been left out of the governor’s executive order,” Equality Florida Senior Political Director Joe Saunders said.

Through another executive order, 19-12, DeSantis implemented major reforms to protect Florida’s environment. The order calls for $2.5 billion over the next four years to restore the Everglades and protect water resources, among other items.

“Our water and natural resources are the foundation of our economy and our way of life in Florida,” DeSantis said in a statement. “The protection of water resources is one of the most pressing issues facing our state.”

DeSantis promised sustained attention to Florida’s environment, something conservative Republicans aren’t typically known for. He has referred to himself as a “Teddy Roosevelt-type Republican,” a reference that leans toward fishing, hunting, and outdoor conservation, rather than left-wing environmentalism.

On education, which is Florida’s second-largest annual budget expense after Medicaid, the newly inaugurated governor has vowed to push school choice reforms, amid opposition by Democrats and teachers’ unions. Taxpayer-funded voucher programs for poor students to attend private schools is a key campaign pledge that’s destined for conflict with the deep-pocketed and highly litigious Florida Education Association, a federation of the state’s individual teachers’ unions.

DeSantis already has tapped former GOP state House Speaker Richard Corcoran to lead the fight. Corcoran was appointed as the DeSantis administration’s Secretary of Education last month. As speaker of the house, he once called the state teachers’ union “evil.”

Florida’s 60-day state legislative session will begin March 5, with Republicans in control in all three branches of government. The political alignment will play a significant role in the 2020 presidential election.

Florida is, by far, the nation’s largest swing state with 29 Electoral College votes. The president, a fellow Republican, has virtually no chance of winning re-election without carrying Florida—something he achieved in 2016 by just 1.2 percent.

DeSantis, now the state’s most powerful public official, won the governor’s election by 32,463 votes out of a total of more than 8 million, or by just 0.04 percent.