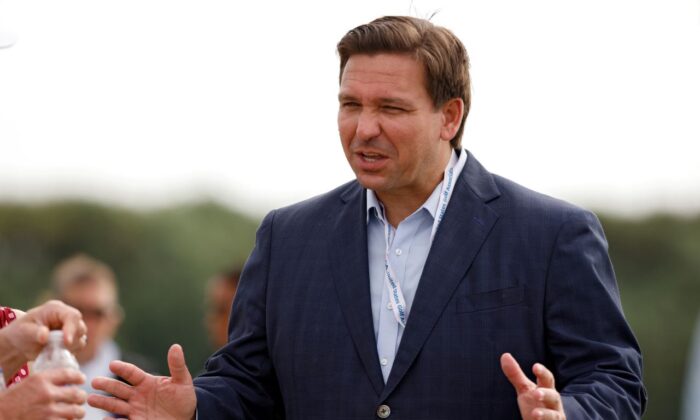 Florida governor Ron DeSantis meets with fans during Day One of The Walker Cup at Seminole Golf Club in Juno Beach, Fla., on May 8, 2021. (Cliff Hawkins/Getty Images)
By Jack Phillips

Florida Gov. Ron DeSantis on Monday signed a bill requiring teachers in K-12 first-period classes to provide between one and two minutes of silence, which will allow students to pray if they want.

The Republican governor explained that many of the Founding Fathers who helped create the country’s system of government wouldn’t agree with the notion that “you can just push God out of every institution and be successful.”

“I’m sorry, our Founding Fathers did not believe that,” DeSantis added, speaking at a signing event in Bal Harbour.

The bill, H.B. 529 (pdf), requires the principals at public schools to require certain teachers to take a moment of silence at the start of each school day in public schools. The bill also bans “teachers from making suggestions as to the nature of any reflection that a student may engage in during the moment of silence.”

“In today’s hectic society too few persons are able to experience even a moment of quiet reflection before plunging headlong into the activities of daily life,” according to the measure. “Young persons are particularly affected by the absence of an opportunity for a moment of quiet reflection. The legislature finds that our youth and society as a whole would be well served if students in the public schools were afforded a moment of silence at the beginning of each school day.”

The GOP-backed bill also encourages parents to talk about the designated moment of silence with their children while making suggestions about how to best use their time.

State Rep. Randy Fine, a Republican who sponsored the bill, said that it’s designed to combat the effects of “technological” and “media-driven” turmoil that are ever-present within society.

“Our children desperately need time for quiet reflection,” Fine said, according to a news release. “Because it is in those fleeting moments that we find our higher purpose. That’s why I was so proud to sponsor HB 529, to ensure that each child gets a minute at the beginning of the school day—without a TV on or a cellphone blaring—to think about the world and their place in it. It is my hope that these small moments to become emotionally centered will have a big impact on their days—and their lives.”

Local media noted that the moment of silence bill had been sought by the Jewish Chabad-Lubavitch movement for years.

During the same signing event at the Shul of Bal Harbour on Monday, DeSantis signed a measure that would bolster volunteer ambulance services, known as Hatzalah, which operate generally in conservative Orthodox Jewish neighborhoods.