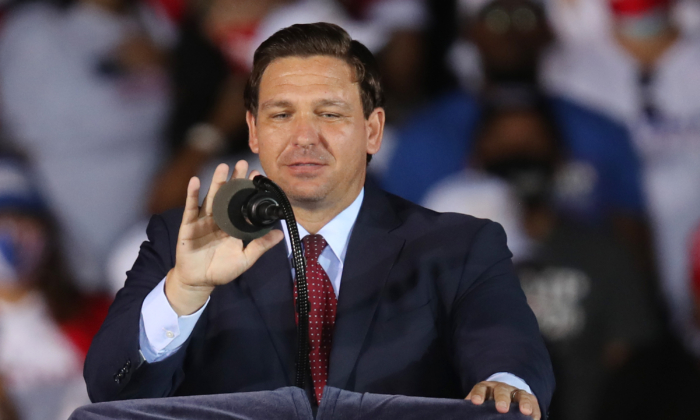 Florida Gov. Ron DeSantis has set up a channel on the video-sharing platform Rumble after being censored by YouTube.

“Gov. Ron DeSantis is a longtime proponent of free speech and has been at the forefront of the effort to demonopolize Big Tech,” Rumble CEO Chris Pavlovski said in a statement.

“He understands firsthand Americans’ distrust of monolithic tech companies and the danger they pose to free expression and free markets. In fact, YouTube recently removed from its platform a video of the governor and a handful of Ivy League-educated medical experts discussing the downsides of prolonged pandemic-related lockdowns. Rumble, on the other hand, invites robust and civic dialogue on our platform, including Gov. DeSantis’ insights and expertise.”

Earlier this month, Google-owned YouTube, without warning, scrubbed videos of a roundtable discussion between DeSantis and prominent scientists from Harvard, Oxford, and Stanford who assessed that lockdowns were an ineffective measure against the spread of the CCP (Chinese Communist Party) virus, commonly known as the novel coronavirus.

The American Institute for Economic Research (AIER) was the first to flag the video’s disappearance. The original clip is now hosted on a different platform, appearing along with a full transcript on the AIER website.

“Google and YouTube have not been, throughout this pandemic, repositories of truth and scientific inquiry, but instead have acted as enforcers of a narrative, a Big Tech council of censors in service of the ruling elite,” DeSantis said in response to YouTube’s censorship during an April 12 video conference call with three of the scientists from the banned video.

“When they took down the video … they were really continuing what they’ve been doing for the past year: stifle debate, short-circuit scientific inquiry, make sure that the narrative is not questioned. And I think that we’ve seen already that that has had catastrophic consequences for our society.”