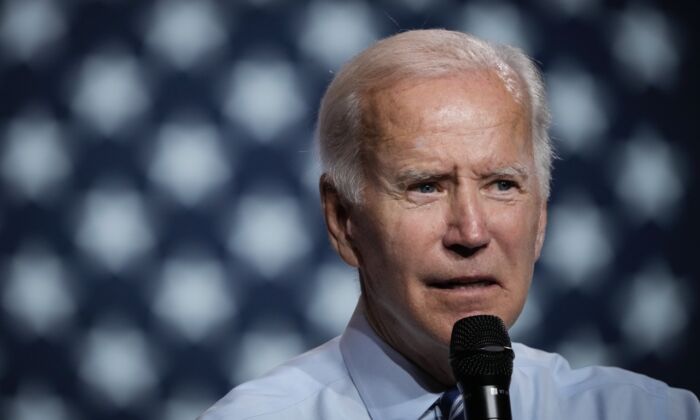 A local GOP office in central Florida was vandalized over the weekend, soon after President Joe Biden had described some of his Republican colleges as advocates of “semi-fascism.”

The front windows to the Republican Party of Seminole County office were spray-painted with the message “Eat [expletive] fascists” on Monday morning, along with an encircled “A” which appeared to be an anarchy symbol. The perpetrator also squirted super glue into the front door lock, forcing members to break into the building from the back, according to an incident report filed by the Casselberry Police Department.

The police report said no surveillance video had captured the suspected vandal and the estimated damage to the window and door lock was $700.

It came days after Biden’s controversial comments last Thursday classifying the “Make America Great Again” (MAGA) slogan espoused by former President Donald Trump to be “semi-fascism,” bashing those he labeled as MAGA Republicans at a Democratic rally in Maryland.

“It is a hate crime,” the Seminole County GOP said in a Monday post on social media. “This is the result of hate speech by Biden and the independent/democrat guy running for Governor.”

“There is no place for violence in our political discourse, and the GOP will not be intimidated,” she said in a Monday post on Twitter.

The spray-painted message had been cleared by Monday, as per another post to the county GOP’s Facebook page. “Our answer to hate, clean up and move on,” it reads.

The building, located in a suburb of Orlando, Florida, is one of the several local GOP offices that have been targeted in recent months over division on issues like abortion and gun control.

On June 24, the same day when the U.S. Supreme Court reversed Roe v. Wade, violent extremists vandalized the North Carolina GOP headquarters in Raleigh, leaving threatening graffiti calling on pro-life supporters: “Get ready. If abortion isn’t safe, neither are you.”

The following week, a man vandalized a county GOP headquarters office in Winfield, Kansas, setting campaign materials on fire outside the building, as recorded in a social media video, and later breaking the glass door with a rock.

Seminole County State Committeeman Jesse Phillips told Fox News that although the cause for the latest incident is unclear, his group’s focus remains getting Florida Gov. Ron DeSantis and Sen. Marco Rubio reelected ahead of the midterms this fall.