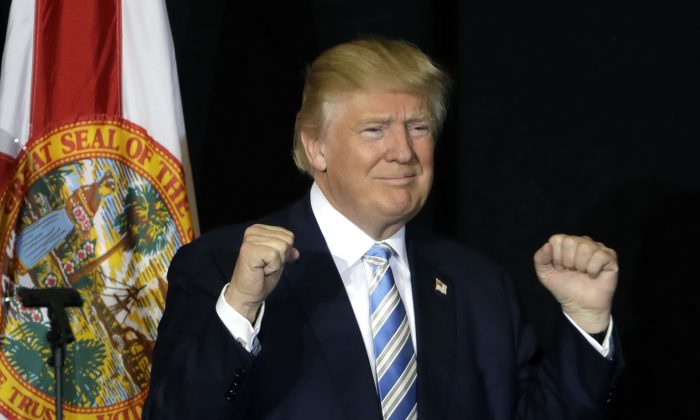 TALLAHASSEE, Fla.—It’s all about Florida—again. Sixteen years after a chaotic ballot recount decided the presidency, voters in the Sunshine State may once again be pivotal in deciding the outcome of this year’s U.S. election.

Millions of Floridians were expected to flock to the polls Tuesday, and their ballots could decide whether or not Republican Donald Trump or Democrat Hillary Clinton becomes the next president.

Both candidates have pegged their campaign fortunes to Florida, scheduling a seemingly nonstop series of campaign events throughout the state in the weeks leading up to Election Day.

“Florida can decide who our next president is, which will affect the nation and the world,” Clinton said last week during a visit to Pasco County, just north of Tampa.

Trump too has made the stakes clear: “It’s a big, big vote in the state of Florida.”

The attention to this year’s election appears to have sparked a record turnout. Slightly more than half of Florida’s active registered voters had voted by mail or at an early voting site before Election Day.

Marcy Osier is among the scores of residents who voted early. Osier, 63, moved to St. Petersburg from Georgia last month and promptly exercised her right to vote, casting a ballot for Clinton. She admitted to being nervous about the election.

“There are too many undecideds out there,” she said.

Osier attended a rally featuring Joe Biden and singer Jimmy Buffet on the eve of the election.

To the north, in Gainesville, Alston McLeod, 71, chose to vote early Tuesday. The retired law enforcement officer declined to say for whom he voted, but said he’s mostly concerned about securing the country’s borders.

“People can just walk in and take over and demand stuff. They are not a citizen,” McLeod said. “The people who do it the right way, they are being mistreated, too. That’s what I’m kind of tired of.”

Florida, with its 29 electoral college votes, could easily tip the election. Florida famously decided the 2000 election after George W. Bush won the state by just 537 votes over Al Gore following a recount that lasted several weeks.

Bush won the state easily four years later, but President Barack Obama carried the state during the past two elections. The Clinton campaign has turned to Obama as one of its biggest surrogates in Florida. The president has visited the state three times ahead of Election Day in an effort to rally support.

Florida’s position as a constant swing state is due in large part to its continued population growth and the diversity of that population. The nation’s third-largest state has regions that range from military enclaves in the conservative Panhandle to Miami, a cosmopolitan hub connected to Latin America and the Caribbean.

As the population has grown, so has the number of registered voters. Florida has gained 929,327 registered voters since the past presidential election, according to voter registration data released late last month.

About 39 percent of that gain came from Hispanics, a group that traditionally underperforms at the ballot box. Hispanics make up just under a quarter of Florida’s population of 20 million residents, but as of Oct. 18, they represented 16 percent of registered voters.

Hispanics could prove to be a critical force in the final outcome. Daniel Smith, a University of Florida professor, has analyzed data showing that the percentage of Hispanic voters participating so far this year is much higher than in 2012. Smith’s analysis shows that 11 percent – about 522,000 voters – of those who voted early four years ago were Hispanic. This year, nearly 1 million Hispanic voters—about 15 percent of the electorate—have already voted.