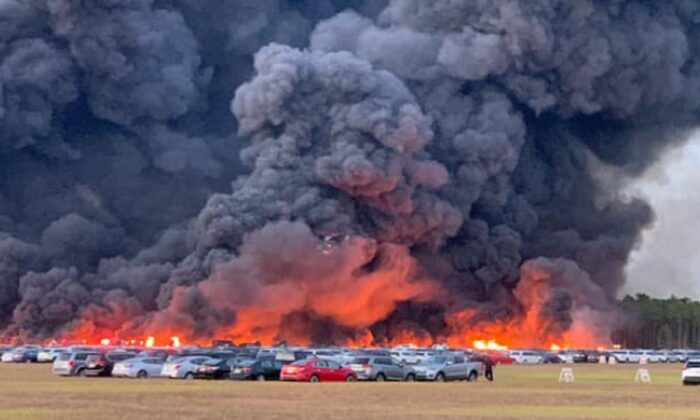 A fire next to Southwest Florida International Airport in Fort Meyers has been contained but not before it destroyed or damaged more than 3,000 cars on April 3, 2020. (Charlotte County Sheriff's Office)
US News

A fire next to Southwest Florida International Airport in Fort Meyers has been contained but not before it destroyed or damaged more than 3,000 cars.

There were 3,516 cars destroyed or damaged by the fire, Vicki Moreland, communications director for the airport, told the News-Press. About 3,850 are undamaged, Moreland said.

The fire broke out on April 3 in an area where rental cars were parked and weren’t occupied. Witnesses said they heard explosions, flames, and sparks.

Lee County, where Fort Meyers is located, and parts of the Florida peninsula are suffering from moderate drought conditions, according to the United States Drought Monitor.

Plumes of thick smoke from the fire could be seen 20 miles away, reported WINK-TV. Several agencies sent crew members to battle the blaze on the ground and from the air.

A number of spectators gathered to view the massive fire despite a stay-at-home order caused by the CCP (Chinese Communist Party) virus. Some people said the people were not engaging in proper social distancing measures.

“This isn’t an essential activity,” Jennifer Bonhoff, a local woman, told the News-Press. “We’d be sitting at home,” she said, adding that it broke up the boredom of sitting at home.

Officials have launched an investigation into the blaze.

Ryan Mason of the Florida Forest Service said that “100 percent containment does not mean the fire is 100 percent out, once we call a fire controlled that means that its dead out, but until then we will continue to monitor it,” Fox4 reported.

Investigators Walt Zalisko told the station this fire might have been the result of a simple mistake.

“They could have moved a car whose undercarriage was still warm and that would have ignited the grass, or one of these car shuttlers could have left the engine running. When you are moving hundreds of cars you are bound to make a mistake,” said Zalisko.