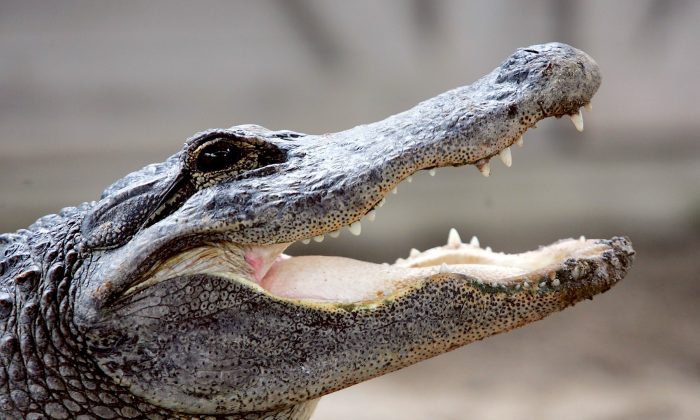 An alligator is seen at the Gator Park in the Florida Everglades, on May 17, 2006. (Joe Raedle/Getty Images)
US News

A Florida family was shocked to find an uninvited guest in their backyard on April 8.

Mother Senta Evans was in the middle of her usual morning routine of releasing her dogs to the backyard when she froze. She saw a giant gator weighing about 300 pounds at the bottom of her pool.

MASSIVE GATOR 🐊: One Florida family had an interesting start to the week after they found a 9-foot alligator in their swimming pool. https://t.co/rRYn4UBbFj

Evans contacted the Florida Fish and Wildlife Conservation Commission (FWC), which helped organize a wildlife handler who was close to the PGA National area.

FWC released a statement on social media, urging people not to feed gators in the wild.

“Living with alligators safety tip: never feed an alligator and keep your distance if you see one,” FWC wrote in a Twitter post dated April 6.

“Swim only in designated swimming areas during daylight hours and keep pets on a leash and away from the water,” FWC added on its website.

Living with alligators safety tip: Never feed an #alligator & keep your distance if you see one: https://t.co/WMUaZ7rysZ #Florida pic.twitter.com/yCQrz5J7td

The family had only just used the pool a day earlier and were not sure how the gator entered the property. The handler speculated the reptile could have crawled under the chain link fence in the backyard.

After just 20 minutes of pulling, the handler removed the gator from the pool and a neighbor helped the professional lift the gator onto the back of his pickup truck.

NOPE NOPE NOPE 😨 One family started their Monday with a shock! How did this giant gator get in their fenced in yard?!

The family said the gator would be relocated to a farm in the Lake Placid area, 93 miles northwest of their home.

Have you ever seen a gator this big in SWLA? https://t.co/lJHlbdj6ne