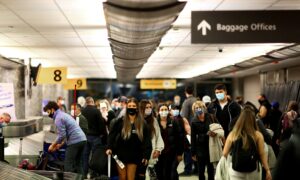 A family spelled out the word “H-E-L-P” in Florida after Hurricane Michael left a path of devastation.

Amber Gee was looking at the online National Oceanic and Atmospheric Administration’s (NOAA) aerial map to check the damage on her grandmother’s property.

“I was checking on damages in the area on houses that belong to my family and I came across my grandma’s house,” Gee told ABC News. “And they had the word H-E-L-P written out in the yard.”

Gee, according to her interview, believed that her grandmother and other relatives evacuated before Michael, a Category 4 storm with 155 mph winds, made landfall in Mexico Beach.

However, they ended up staying at a home in Youngstown, Florida, located 20 miles from Panama City, which was also devastated during Hurricane Michael.

“Luckily enough, my uncle who was staying there and was thinking outside of the box, wrote the word H-E-L-P out,” Gee told ABC News. She contacted the Bay County Emergency Management.

“The hurricane has turned everything upside down everywhere,” she added in the ABC report. “Some were more fortunate than others. I’m just happy that everybody is safe and sound and, hopefully, soon we will all get through this together and recover from this storm.”

They sent deputies to the area and rescued the people. “This is an incredible story of how people are working together,” the agency posted on its Facebook page, according to USA Today.

President Donald Trump is slated to visit Florida and inspect areas that were damaged by the storm. Reports on Oct. 15 said that Trump and Air Force One touched down at Eglin Air Force Base in Okaloosa County, Florida.

Trump tweeted: “On our way to Florida and Georgia!”

On our way to Florida and Georgia!

“Will be leaving for Florida and Georgia with the First Lady to tour the hurricane damage and visit with FEMA, First Responders and Law Enforcement,” Trump also wrote. “Maximum effort is taking place, everyone is working very hard. Worst hit in 50 years!”

“We cannot thank them enough for their hard work and dedication,” Gov. Rick Scott said of the first responders who are still rescuing people.

At least 46 people are still missing in Florida after Michael touched down, according to the mayor of Mexico Beach, Al Cathey. He said 289 people, including 10 children, decided to stay despite evacuation orders last week, ABC reported.

“We don’t have a building; from my understanding, the water surge moved it off its foundation,” Mexico Beach Police Chief Anthony Kelly told ABC. “The officers, I finally made accountability of them all today, two days after the fact. … They’re not just my officers, the people that I work with, they’re my family.”