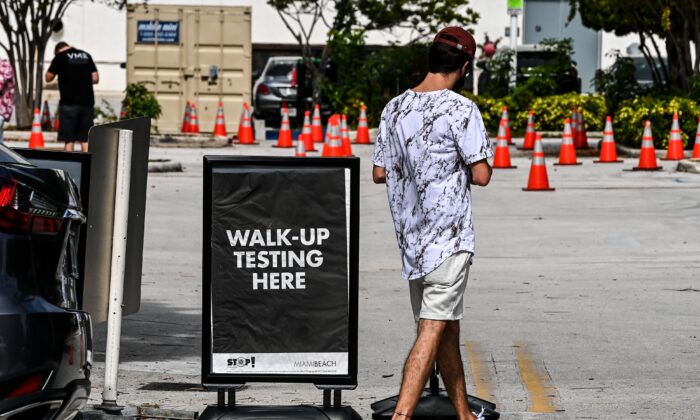 A private contractor filed a lawsuit on July 7 against the Florida Division of Emergency Management for $4.4 million for allegedly not paying for COVID-19 test kits, seeking damages, interest, and “other costs.”

According to the lawsuit, the state agreed to order a total of 600,000 test kits in March 2020, at the height of the COVID-19 pandemic. Emails from emergency management confirm the purchase, but the lawsuit claims that the state only paid for one-third of the tests that were ordered.

Morgan and Morgan, a Florida-based law firm known for its class-action lawsuits, filed suit against the state in the Second Judicial Circuit Court in Leon County.

“Everyone, from individuals to the smallest of small businesses to the largest of entities like the state of Florida, is bound to honor the contracts they sign,” attorneys John Morgan and Thomas Cargill said in a statement. “Our client expended considerable resources and effort to fulfill two huge COVID-19 test orders during a time when those critically needed tests were in short supply. … We are ready to fight to compel the Department of Emergency Management to uphold their end of the bargain.”

Amelia Johnson, deputy director of communications and external affairs at the Division of Emergency Management (DEM), told The Epoch Times in an email that the “division doesn’t comment on ongoing litigation.”

The lawsuit claims that the DEM agreed to purchase approximately 200,000 COVID-19 viral sample collection kits from Essential Diagnostics for $2.2 million through its agent, Global Innovative Concepts on March 22, 2020.

The agreement was for the state to pay within 45 days of delivery of the kits, according to the lawsuit. Two days later, according to court documents, another state official requested more test kits from Global. Global then sent another 400,000 kits for $4.4 million along with a purchase order to the state of Florida for payment. Allegedly the state had to pay half of the money upfront.

The lawsuit says half was paid and the remainder was due within 45 days of delivery.

However, the second purchase order wasn’t signed, but a letter was sent to Essential Diagnostics agreeing to the additional kits and a check for $2.2 million was issued.

In the first week of April 2020, another state official, Jared Rosenstein, then legislative affairs director for the Division of Emergency Management, said the state “would not pay for an additional 400,000 kits until all of them had been delivered.”

In May 2021, Rosenstein left the division and joined Capital City Consulting, a Tallahassee lobbying group.

“Global … was able to secure a much-needed product during the peak of COVID test demands, and it did so relying on DEM’s promise,” the complaint reads.