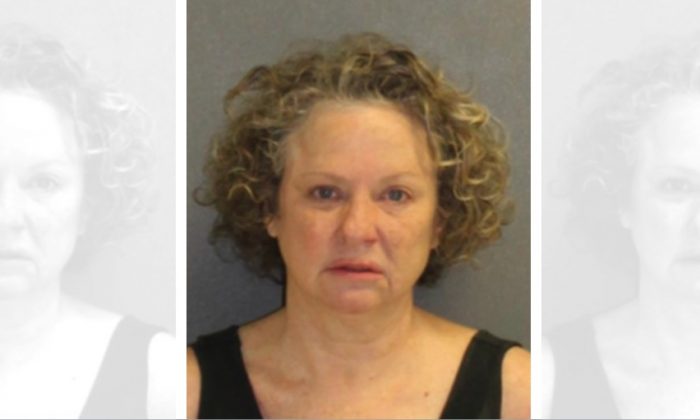 Florida woman Julie Edwards, 53, was arrested on charges of driving while under the influence in Volusia County, Fla. on Feb. 8, 2019. (Volusia County Sheriff's Office)
Crime and Incidents

A Florida woman stopped on suspicion of drunken driving allegedly hurled racist threats at the black deputy who detained her, including saying the Ku Klux Klan is “gonna hurt you bad.”

Charging documents cited by ABC allege that 53-year-old Julie Edwards made the threats while being investigated for DUI late Thursday, Feb. 7, at a home in DeLand.

King, who was responding to a “disturbance” at the residence, said he found Edwards trying to back up her Lexus and slurring her words, the Miami Herald reported. He also reportedly noticed her breath reeking of alcohol.

Edwards refused to take a breathalyzer test or participate in field sobriety tests, according to the report.

The police report cited by the Herald indicates Edwards also “had a prior refusal to submit from a prior DUI,” resisted getting into the police cruiser and tried to walk away from the arresting deputy.

As King filled out paperwork, the woman launched into an abusive tirade.

The VCSO on Tuesday released body camera footage taken by the deputy, in which a female voice alleged to be that of Edwards can be heard uttering threats.

The woman is not seen in the footage.

“Watch this if you need any more proof there’s no expiration date on ignorance,” Sheriff Mike Chitwood said when the video was released on social media.

“You may have heard someone made racist threats against one of our deputies,” Chitwood continued. “Before you go on a racist rant, just remember we have body cams.”

The sheriff’s final statement before the video warns viewers of the disturbing content of the video.

As @SheriffChitwood put it: "Watch this if you need any more proof there's no expiration date on ignorance."

You may have heard someone made racist threats against one of our deputies.

Before you go on a racist rant, just remember we have body cams.

‘I Will Find You’

A voice alleged to belong to Edwards can be heard in the video initially challenging the validity of her detainment, saying “You did not see me drive that car, and you did not see my keys in it.”

The woman said she would sue and “buy me a house because of you.”

But then her utterances took a disturbing twist.

“Keep it up boy,” she can be heard saying. “I will find you one day in a corner.”

“I won’t find you, somebody else will,” she continues.

“Are you making a threat to a law enforcement officer?” King asks.

“No, I didn’t say that,” Edwards allegedly responds.

“So what do you mean you’ll find me one day?” asked King, who remained calm throughout the exchange.

“I didn’t say I’d find you, I said somebody else will,” she said, clarifying: “I won’t find you. The KKK people will.”

“All right, thank you for that threat,” King continued. “I’ll add that charge in here, too.”

The exchange continued, with the female voice saying the deputy “[expletive] with the wrong white people” and “My KKK friends will burn your family. Should never be here in the first place.”

“You know what’s going to happen to you now? You don’t want to know. You’re done. You’re [expletive]. They’re gonna hurt you bad,” the female voice is heard saying.

The woman mentioned the Ku Klux Klan several times, saying at one point that they will burn crosses in front of his home and that “[expletive] should have never been let out of slavery.”

“You’re gonna look like a dumb [expletive],” the woman shouts as the deputy drives away from the scene.

Edwards faces charges of resisting an officer without violence, driving under the influence, making a threat against law enforcement and refusing to submit to testing, according to the Herald.

She was booked into Volusia County Jail and was released after posting a bond.

Chitwood praised King for maintaining his composure during the arrest.

“Kudos to Deputy King for his calm response to all the racist garbage this KKK Enthusiast could throw at him.”

Kudos to Deputy King for his calm response to all the racist garbage this KKK Enthusiast could throw at him.

Great job Deputy & thank you to everyone condemning the hate in this video! https://t.co/RvQ71WFdj4