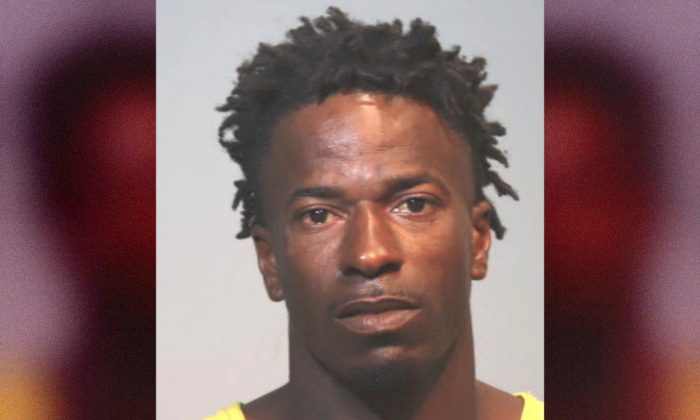 A Florida driver has been charged with attempted murder after a video was released showing him dragging a deputy down an interstate ramp during a traffic stop.

Rocky Rudolph Jr., 38, was pulled over in Seminole County on June 29 on suspicion of having tinted windows in violation of the law.

Several minutes into the stop Rudolph Jr. became irate after being questioned by Deputy Aaron Blais about the smell of marijuana coming from the SUV, according to the sheriff’s office (pdf).

When the deputy asked him to shut down the engine, Rudolph Jr. began to drive off, with the deputy clinging to the window and riding on the rail as he pulled out his service weapon.

Rudolph can be seen in video footage grabbing at the gun as the SUV briefly halts before heading down the exit ramp again. The deputy was dragged along by his gun arm as Rudolph Jr. gripped it as he drove down the ramp, according to Seminole County Sheriff’s Office.

Dash camera footage shows the moment Blais is dragged off.

Several shots can be heard being fired by Blais in body camera footage of the incident released by the sheriff’s office.

After being dragged for 200 yards, Blais was thrown free from the SUV as it veered to one side, according to the statement from the sheriff’s office. He was transported to a local hospital with non-life-threatening injuries and later released.

Rudolph Jr. ran off into the bushes. After an intensive multi-agency manhunt, he was tracked down several hours later in his sister’s car and arrested.

Rudolph Jr. had suffered a gunshot wound to the leg and was transported to a local hospital where he remained as of Sunday morning, according to the sheriff’s office.

“This was a very dangerous situation. Our deputy’s life was put at risk by a career criminal who had no regard for his well-being,” said Sheriff Dennis Lemma. “I applaud Deputy Blais’s professionalism and dedication to duty.”

A stolen handgun was recovered from Rudolph Jr.’s SUV according to deputies, and, according to WESH, they recovered another gun that was thrown into the bushes.

WANTED SUSPECT: Identified as ROCKY M RUDOLPH JR of Apopka. Please Call 911 if you know is whereabouts or have information. pic.twitter.com/p6GOK3pH7z

Lemma said that Blais was “absolutely convinced that Rudolph was reaching for his gun” during the incident, according to Fox News.

“Rudolph reaches toward the gun hand of Deputy Blais, and actually holds him there and drives at least 100 yards heading toward I-4 before Deputy Blais falls off the car and into the median,” Lemma said, according to Click Orlando.

According to the Orlando Sentinel, Lemma said it was unclear how many bullets had been fired.

“I don’t know how many rounds were fired into the car, but it was probably not enough,” he said.

The full video records Blais and Rudolph Jr. conversing for six or seven minutes in what appears to be a good-natured exchange, as Blais informs him that his window tints are possibly in violation of the law, and as he checks out his license and vehicle details.

At one point, as he looks over his license, Blais tells Rudolph Jr. that his name—Rocky Rudolph Jr.—is the best name he has ever seen in his enforcement career.

But when Blais says that he can smell marijuana coming from the car, and asks Rudolph Jr. if he has any in the car, the driver becomes increasingly uncooperative.

As Blais is leaning his hands on the windowsill of the SUV, holding some paperwork, Rudolph Jr. starts to drive off.

“Deputy Blais continued to order Rudolph to stop the vehicle and show his hands,” said the sheriff’s office statement. “Rudolph temporarily stopped the vehicle, but continued to ignore the commands to show his hands and to put his vehicle in park. Rudolph again repeatedly reached for the deputy’s gun while again accelerating on to the I-4 west-bound on-ramp into traffic, further endangering his life. Deputy Blais then fired his service weapon in an attempt to avoid being seriously injured or killed.”

The charge of attempted first-degree murder is punishable by possible life in prison or even by the death penalty in Florida.