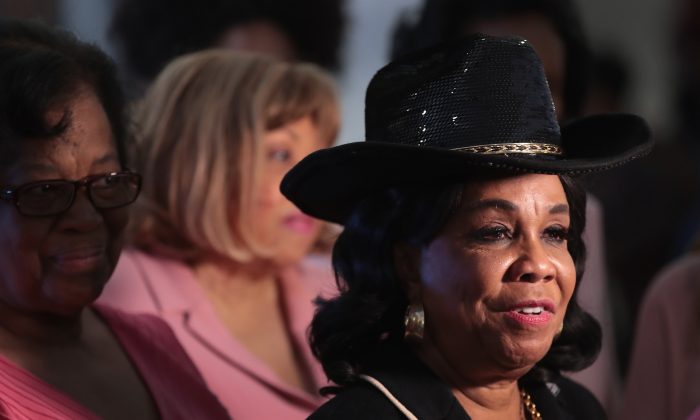 Democratic Rep. Frederica Wilson (D-Fla.) said on July 2 that she believes anyone “making fun of members of Congress” online should face prosecution.

Wilson was leading a congressional delegation on a tour of an immigrant detention facility in Florida, according to local reports, when she made the comments.

“Those people who are online making fun of members of Congress are a disgrace and there is no need for anyone to think that is unacceptable [sic],” Wilson said during a press conference outside the Homestead Temporary Shelter for Unaccompanied Children.

Democrat Rep. Frederica Wilson (FL) says that people who are “making fun of members of Congress” online “should be prosecuted” pic.twitter.com/f69KwOeJ0n

Wilson’s comments were made after a report by ProPublica surfaced about a secret Facebook group where around 9,500 members, some allegedly current and former CBP employees, were reportedly sharing derogatory comments and vulgar images about illegal immigrants and congressional lawmakers. Some of the comments were directed to Democratic Rep. Alexandria Ocasio-Cortez (D-N.Y.).

The CBP officials responded to the report on July 1 saying that the DHS Office of the Inspector General had initiated an investigation.

“These posts are completely inappropriate and contrary to the honor and integrity I see—and expect—from our agents day in and day out. Any employees found to have violated our standards of conduct will be held accountable,” Border Patrol Chief Carla Provost said in the statement.

Ocasio-Cortez also responded to the report, accusing the agency of “violent culture.”

“This isn’t about ‘a few bad eggs.’ This is a violent culture,” she wrote on July 1.

This just broke: a secret Facebook group of 9,500 CBP officers discussed making a GoFundMe for officers to harm myself & Rep. Escobar during our visit to CBP facilities & mocked migrant deaths.

This isn’t about “a few bad eggs.” This is a violent culture. https://t.co/SkFwThHElx

Wilson also blamed President Donald Trump for people losing respect for Congress, media, and the White House, saying that he had “taken this country to its knees.”

The Florida Democrat has long been critical of the president. In 2017, she came into the spotlight after she accused Trump of making insensitive comments to a widow of an army sergeant who was killed in an attack in Niger that year after she listened in on the phone call and leaked the contents of the private conversation.

“I was stunned when I came to work yesterday morning,” Kelly said during a White House press briefing at the time.

The sacredness of a troop making the ultimate sacrifice for his country was “eroded a great deal yesterday by a selfish behavior of a Member of Congress,” he added.