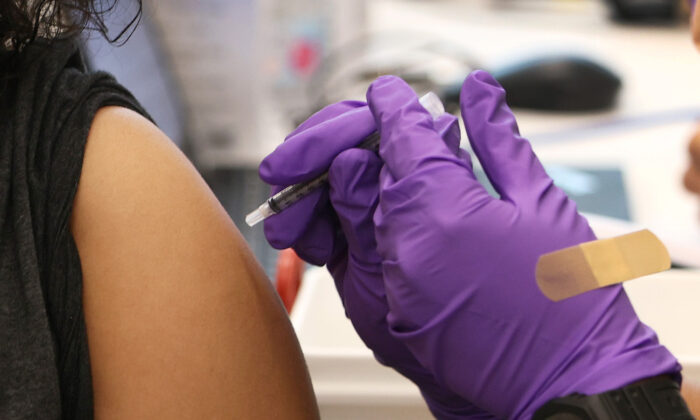 A person receives a COVID-19 vaccine at the Jackson Memorial Hospital in Miami, Florida, on April 15, 2021. (Joe Raedle/Getty Images)
US News

A federal court in Florida has temporarily blocked the Biden administration’s COVID-19 vaccine mandate directed at federal contractors, marking a small win for the sunshine state as litigation over the matter continues.

Florida is among 19 states that sued the Biden administration in late October over the federal vaccine mandate for government contractors, outlined under Executive Order 14042 that President Joe Biden issued on Sept. 9.

The executive order requires almost all federal employees to get a COVID-19 vaccine as a condition of employment, including civilian federal employees and contractors. Regular COVID-19 testing wouldn’t be an option, but religious or medical exemptions from vaccination may be granted.

In his order (pdf) on Wednesday, Merryday said Florida “demonstrates a substantial likelihood” that an executive order from Biden (Executive Order 14042) “exceeds the President’s authority” under the Federal Procurement and Administrative Services Act.

“The defendants identify no section of FPASA demonstrating that Congress ‘clearly intended’ to authorize the President (assuming Congress can) to impose a public health requirement as a condition of a contractor’s supplying services,” Merryday wrote.

“Of course, the defendants maintain that contractors remain free to refuse to contract with the world’s largest buyer of goods and services,” he continued. “But because the President must rely, at best, on Congress’s authorization under FPASA, the President’s attempt to impose under [FPASA] a requirement both that Congress itself likely lacks the power to impose and that traditionally remains textually committed by the Constitution to the states demands a rationale beyond that required for the posting of notices in the workplace, the use of a centralized employment eligibility system, and the like.”

The Florida attorney general said she was “Proud to secure an injunction.”

“Floridians should not have to choose [between] the vaccine & their careers. There is still a lot of fight left in us & we will continue to push back against unlawful fed overreach,” Moody wrote on Twitter.

A nationwide preliminary injunction is already in place blocking the Biden administration’s vaccine mandate for federal contractors, after a federal court in Georgia on Dec. 7 granted the injunction in a separate seven-state lawsuit led by Georgia. Alabama, Georgia, Idaho, Kansas, South Carolina, Utah, and West Virginia were the other plaintiffs.

The court had decided to block the mandate for the whole of the United States because a national trade organization—Associated Builders and Contractors (ABC)—was granted permission by the court to intervene in the case as a plaintiff.

“[G]iven the breadth of ABC’s [nationwide] membership … limiting the relief to only those before the Court would prove unwieldy and would only cause more confusion. Thus, on the unique facts before it, the Court finds it necessary, in order to truly afford injunctive relief to the parties before it, to issue an injunction with nationwide applicability,” U.S. District Judge Stan Baker wrote in the order (pdf).