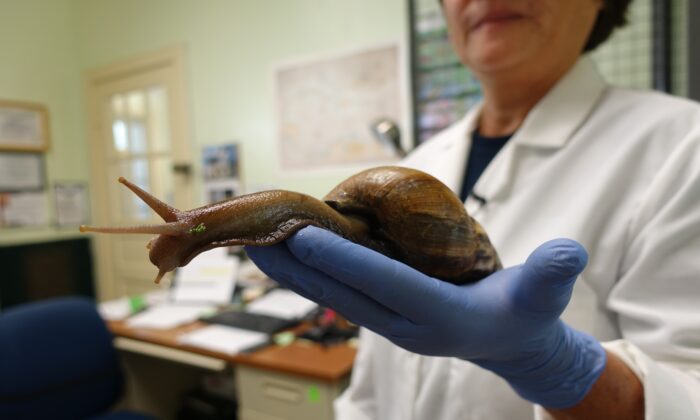 PUNTA GORDA, Fla.—Giant African land snails have been detected in Pasco County prompting the Florida Agriculture Commission to issue an agriculture quarantine to protect the public and reduce crop damage.

The invasive snails can wreak havoc on the vegetation and agriculture around the state and cause millions of dollars in damage if not eradicated, officials say.

Dr. Whitley Elmore, horticulture director for Pasco County, said this is the third time since the late 1960s that the state has had an outbreak of snails.  The snails are considered one of the top five most destructive invasive organisms on the planet, she said.

“There have been a couple of different situations, in the past back in the 60s around the Miami Dade area,” Elmore told The Epoch Times on July 21. “It was believed they were smuggled here from Africa and used in some religious ceremonies.”

The illegal pet trade is mostly who is to blame for the snails being in Florida, she said.

“The reason we know that is because the snails look just a little bit different than the previous snails that the state has had,” she explained. “The mollusk itself inside was a brown color and the one found in Pasco are a creamy white color, and that makes them highly desirable in the pet trade because of the contrast between the shell and the rest of the animal.”

Elmore said the snails that have invaded Pasco County were more than likely released or escaped from aquariums or other confined domains.

Dr. Greg Hodges, plant industry assistant director for the Florida Department of Agriculture and Consumer Services (FDACS) said at a July 7 press conference that the snails reemerged in 2010 and were “successfully eradicated.”

However, Elmore said it was the watchful eyes of “citizen scientists” that alerted the department of the problem.

“This situation arose from a citizen in New Port Richey that said, ‘hey I’ve got something that looks different. It looks kind of weird. I’m not sure what it is,’” she recalled. “They emailed a picture to our office, and we were very quickly able to go and look. It wasn’t anything native.”

Elmore said they sent the snails up to the University of Florida where scientists confirmed the snail’s identity.

“This was a small, isolated event and we’re really thankful that we have what we call citizen scientists. When they see something they say something,” she said.

Hodge and Elmore warn that touching the snails can be harmful to humans and to pets.

“The snails carry the rat lungworm parasite that is known to cause meningitis in both humans and animals,” Hodge said. “Avoid touching the snail without gloves due to the meningitis risk.”

The quarantine for Pasco County took effect on June 25 and prevents residents from moving the snail or related items, like plants and soil, in or out of the designated quarantine area.

Hodge said FDACS has estimated the eradication process to take three years and they are using the pesticide Metaldehyde to treat the soil.

“Successful eradication can be declared two years after the last detection of a live snail and after we have completed the appropriate controls and detection methodologies to ensure that we have indeed eradicated the population,” Hodge said.

State official estimates that 30 FDACS staffers have as of July 15 captured more than 1,000 dead or living snails from 29 properties in New Port Richey, a small town 45 minutes north of Tampa.

The largest snail found in Pasco County measured 4.5 inches long. Elmore said the snails can reach up to eight inches.

She noted that detecting the snails is difficult because they are nocturnal.

“When you would really see them would be more at night,” she explained. “They like cold damp places and are terrestrial so they won’t be found in water, but they could be found relatively close to water.”

What makes the snail so dangerous to the Florida landscape is that they can eat more than 500 types of plants and will even eat the stucco or plaster off of houses and buildings causing structural damage, she said.

“They eat the stucco that provides calcium in order to fortify their shells,” she explained of the plaster-eating eating creeper.

Florida’s Agriculture Commissioner and Democratic gubernatorial hopeful, Nikki Fried weighed in on the snail crisis and warned residents of the danger of handling the snail.

“Let me assure you: We will eradicate these snails,” Fried told a crowd on July 7.

The snails do not have any natural predators and are illegal to possess or transport in the United States.