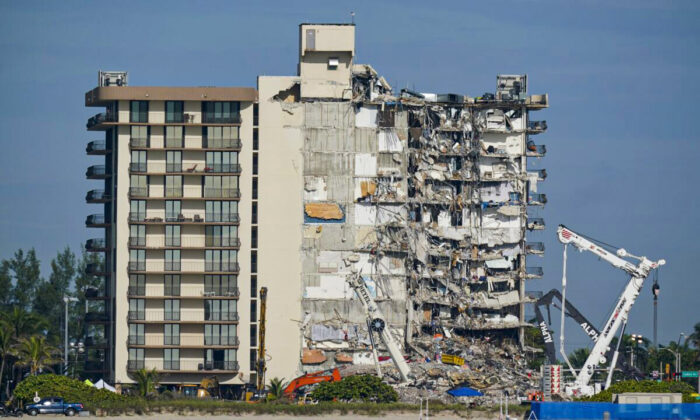 The city of North Miami Beach ordered residents of an apartment complex near the Surfside condominium building that collapsed last June to evacuate after an engineer said it was “structurally” unsafe.

According to the Miami Herald, engineer Brownie P. Taurinski said earlier on April 1 that the building “must be evacuated immediately.”

The complex had been undergoing repairs since July 2021 ahead of the building’s upcoming 50-year recertification inspections, the city said in a statement.

The owner of the apartment building requested that the city order an immediate evacuation of residents on Tuesday starting at 2:00 p.m., according to the engineering report, the city said.

The engineering firm found “a deflection in the elevation of the building’s floor slabs” and “critical structural issues.”

City Manager Arthur Sorey said in a statement that the city is in direct communication with the property owner of Bayview 60 Homes to ensure that all residents are immediately notified and evacuated from the “unsafe” apartment building.

“The City is working with the owner to ensure that all residents will receive proper assistance as they relocate within the next 24 hours. The safety of the residents is our number one concern and we’re working as quickly as possible to mobilize our resources to the building site,” said Sorey.

The city statement noted that per the property owner, all residents currently residing in the building will receive an electronic payment with a full refund for April rent and security deposits made to the owner.

Renters will be allowed to return to the building later in the week to pick up large furniture pieces and personal belongings, it said.

Residents “have to find somewhere to go for now,” Sorey said, the Miami Herald reported.

Many residents told the Miami Herald that they were told to evacuate with little notice and were told over the phone to leave the building.

“I was working and they called me to say I needed to evacuate,” resident Andrea Tores told the news outlet.

The apartment complex is the second to have been ordered evacuated over safety concerns in the city after the deadly collapse of Champlain Towers South in Surfside on June 24 last year, which had a final confirmed death toll of 98.

A week later, the city ordered the evacuation of a condominium building, the 156-unit Crestview Towers. Sorey told the Miami Herald that residents have not yet been allowed to return to the complex.