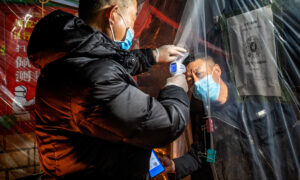 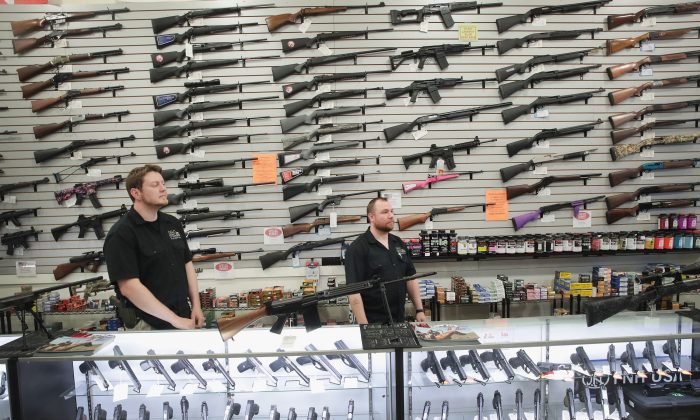 Guns are displayed inside the DSA store in Lake Barrington, Ill., on June 17, 2016. (Scott Olson/Getty Images)
US News

Gun shop owners in West Palm Beach, Florida, said that the city’s local emergency order is forcing them to turn away customers.

In the wake of the George Floyd protests, the city declared a state of emergency on Sunday, prohibiting the sale of firearms and alcohol. Stores can’t intentionally display guns and ammunition, and it’s also illegal to display a firearm in a public place.

“The order doesn’t protect anybody,” said Alex Shkop, owner of Guns and Range Training Center. “Because if somebody wants to get something they can go less than two miles away.”

Adam Golden, a managing partner of Baba Boom Guns, told the news outlet that people are looking to protect themselves because the police department is “stretched thin,” adding that he had to turn away customers.

“[It’s] crippling,” he noted of the emergency declaration. “How can you go a week without pay?”

West Palm Beach first stated the state of emergency on Sunday evening after confrontations between “agitators” and police downtown.

“We sell guns. We do background checks. We’re not selling them off the trucks,” Shkop said. “The good person now is restricted. That’s kinda the irony of the law.”

Mayor Keith James said Friday that “as it has always been, and always will be, public safety is my priority No. 1,” according to WFLX.

Demonstrations across the country Saturday were perhaps the largest one-day mobilization since Floyd died May 25 at the hands of a Minneapolis police officer. The turnout continued around the globe Sunday even as U.S. cities lifted curfews imposed amid last week’s spasms of arson, assaults, and smash-and-grab raids on businesses. Recent days of U.S. protests have been peaceful.

Floyd’s body arrived in Texas for a final memorial service, said Houston Police Chief Art Acevedo. A viewing is planned for Monday in Houston, followed by a service and burial Tuesday in suburban Pearland.

At the newly renamed Black Lives Matter Plaza near the White House, protesters posed with the street sign and the yellow block lettering painted on the pavement by the city. The district’s Metropolitan Police Department had replaced federal law enforcement officers and National Guard troops.