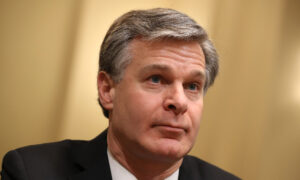 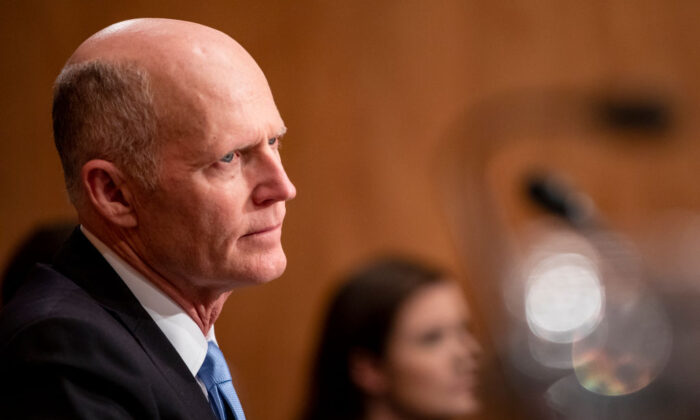 Sen. Rick Scott (R-Fla.) listens as Department of Justice Inspector General Michael Horowitz testifies before the Senate Committee On Homeland Security And Governmental Affairs during a hearing at the US Capitol on Dec. 18, 2019. (Samuel Corum/Getty Images)
China-US News

Florida Calls for Greater Protections Against Chinese Espionage at Universities

U.S. Sen. Rick Scott (R-Fla.), in a press release on Jan. 14, urged more Florida university presidents to respond to a letter he recently sent, requesting them to provide information on steps that schools have taken to protect their academic work from foreign theft.

The letter, dated Dec. 3, asked presidents of state universities to disclose whether any researchers are known to have participated in a Chinese-funded talent recruitment program, or if any faculty members have shared unauthorized information with a foreign entity.

Additionally, the letter asked what kinds of penalties universities have in place for employees and faculty members suspected of espionage.

“I appreciate the responses I’ve received from some Florida universities detailing the steps they are taking to protect their information from Communist China. But I’m still waiting to hear from many universities in Florida,” Scott stated in his press release.

The Senator explained the threat posed by Beijing: “They are actively trying to use strategic relationships to advance their geopolitical and economic goals, which threatens our nation’s security.”

“Everyone needs to understand this risk, and I look forward to hearing back from every institution as we work to protect our universities and our students,” Scott concluded.

Scott’s request to local university presidents came on the heels of a major executive shakeup at the Tampa-based Moffitt Cancer Center, a research institute that falls under the National Institutes of Health (NIH).

On Dec. 18, Moffitt announced the resignation of its CEO and the center director, for “violations of conflict of interest rules through their work in China.” The nonprofit stated that it conducted an internal review after a warning from the NIH, the U.S. government’s chief agency for public health research.

The compliance review found several violations that “prompted separation of four additional researchers,” according to the Moffitt press release.

Back in September 2018, NIH’s director Dr. Francis Collins issued a letter to research institutes across the United States, warning of the potential for foreign influence. The letter did not identify any specific adversaries.

NIH later made clear that the concern laid with Chinese espionage. In a December 2018 report, NIH called out China’s Thousand Talents Program as a plan to “gather the global wisdom and create the China great exploit.”

The program was rolled out by Beijing in 2008 to lure top engineers and scientists around the world, mostly of Chinese descent, into working in China—often to assist the Chinese regime in fulfilling its economic development goals.

Moffitt did not elaborate on details about the violations. However, it added that the internal review “focused on its team members’ participation in China’s ‘Thousand Talents’ Program.”

In response to the Moffitt dismissal, House Speaker of Florida’s state government, José R. Oliva, announced on Dec. 31 the formation of a “select committee to investigate any further improper or illegal activities involving Florida’s research universities, medical research facilities, and individuals associated with such institutions.”

The committee will be chaired by Florida Rep. Chris Sprowls, Oliva’s successor.

Sprowls stated that the committee will hold its first hearing on Jan. 21, according to a Jan. 9 article by Science Magazine.

The threats posed by China’s recruitment programs, in particular, the Thousand Talents Program (TTP), was highlighted in a Nov. 2019 U.S. Senate staff report to the Permanent Subcommittee on Investigations.

China has more than 200 talent recruitment programs in total. TTP in particular has recruited more than 7,000 “high-end professionals” to China, among them several Nobel laureates, according to the report.

The program “incentivizes individuals engaged in research and development in the United States to transmit the knowledge and research they gain here to China in exchange for salaries, research funding, lab space, and other incentives,” the report said.

Among those recruited by TTP, some have “willfully failed to disclose their TPP membership” to U.S. institutions, according to the report.

“In some cases, TTP members received both U.S. grants and Chinese grants for similar research, established ‘shadow labs’ in China to conduct parallel research, and stole intellectual capital and property,” the report pointed out.

In some cases, TTP members “used their access to research information to provide their Chinese employer with important information on early-stage research.”

The report scrutinized employment contracts that TTP members signed to take up jobs in China.

“The contracts include provisions that violate U.S. standards of research integrity, place

For example, some contracts contained clauses that gave Chinese institutions “at least some rights in any intellectual property created by the TTP members in the United States.”

In one case study, an unnamed U.S. university professor, who received numerous U.S. government research grants, was also a member of several Chinese talent recruitment programs. He directed a China-based lab that conducted military research, and also sponsored Chinese students to study under him in the United States.

Many of those Chinese students were “directly affiliated with research and development organizations involved in China’s military modernization efforts,” according to the report.