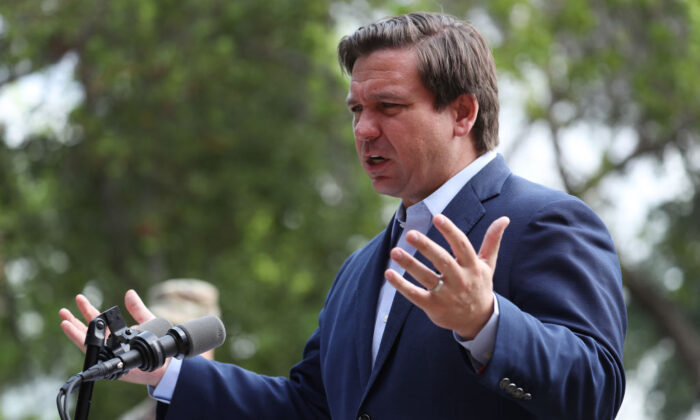 Florida Gov. Ron DeSantis says his state had 24 consecutive months of private job sector growth. He is pictured in this file photo on April 17, 2020. (Joe Raedle/Getty Images)
US

Florida Boosts Its Economy With 57,000 More Jobs in April: DeSantis

Florida added another 57,000 jobs to its workforce in April, according to Gov. Ron DeSantis on May 20.

And DeSantis said the April Florida Jobs Report showed that the state had added 30,000 people to its labor force.

“Our unemployment rate has been lower than the national average for 17 consecutive months,” DeSantis said.

A press release from the governor’s office said Florida’s April 2022 unemployment rate was three percent—or 309,000 people. That is down slightly from the previous month and is lower than the national rate of 3.6 percent.

The governor said Florida has had 24 consecutive months of private job growth, and that sector’s growth has “exceeded the nation’s for over a year.”

DeSantis said he blames the Biden administration for “indulging in a series of policy errors” that have damaged the economy and “made life more difficult for the average American and the average Floridian.”

He estimated that the leisure and hospitality industry added 20,000 jobs, and more than 12,000 jobs were added in the trade, transportation, and utility sector.

He credited the no-lockdown policies he implemented in 2020 when COVID-19 came on the scene.

“By keeping our economy open, maintain a low tax environment, and being fiscally responsible, Florida’s budget reserves have never been stronger,” he said.

The governor said that Florida had “record-breaking” tourism that showed 36 million visitors had vacationed between January and March of 2022, a 14 percent increase over the fourth quarter of 2021.

This marks the third consecutive quarter that the state has surpassed pre-pandemic levels.

Overseas travelers accounted for 44.6 percent of 2021 figures and DeSantis called that “significant.”

“I think the proof is in the pudding. Pre-Covid we had about 24 percent of the overseas market—now we are registering almost 45 percent of the market share for overseas traveling.”

He said in years past, New York garnered the lion’s share of tourism, but Florida has overtaken that market share.

“It would not have happened [had businesses stayed closed],” he said. “The people that wanted to travel—there was only one main option to do: Florida. People had to come.”

“In 2021, Florida expanded its market share of overseas travelers to 44.6 percent of the nation’s total,” the governor said.

“This is the highest market share of overseas travelers than any state has ever achieved and is more than 20 percentage points higher than second-place New York which has 22.3 percent of the market share.

“It also is more than 10 percentage points higher than the previous record of 34.1 percent, which was held by New York.”

DeSantis boasted that more businesses are relocating to Florida bringing with them job opportunities for Floridians.

According to Enterprise Florida’s website, it is estimated that between January 2020 and December 2021 156 companies relocated to Florida bringing 26,316 jobs and $4.74 billion in capital investments.

The March business formation numbers from the U.S. Census Bureau showed that Florida accounted for 683,680 out of the 5.8 million applications for new businesses filed nationally between January 2021–2022.

Andrew Alfano, the CEO of Retro fitness, leads one of many companies that relocated their operation to Florida and joined DeSantis at the press conference.

Alfano, who moved from New Jersey in 2019, said that “Florida is built for opportunity” and is a “business-friendly state.”

“On a national level, the fitness industry was the first to close and it was the last industry to open.”