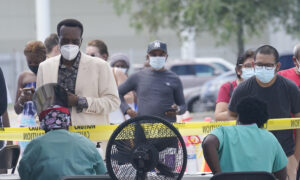 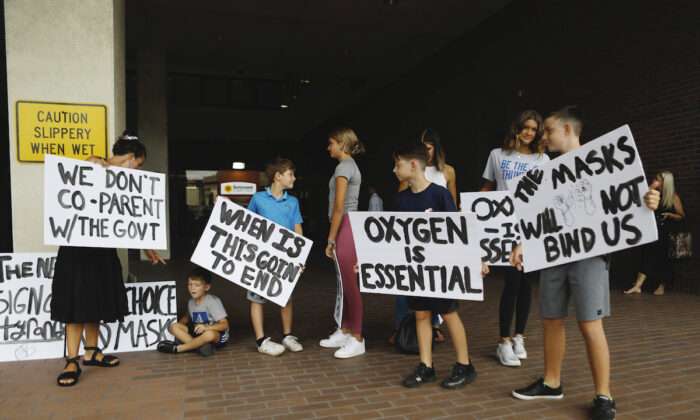 Families protest any potential mask mandates before the Hillsborough County Schools Board meeting held at the district office in Tampa, Fla., on July 27, 2021. (Octavio Jones/Getty Images)
US News

Florida’s State Board of Education voted on Aug. 17 to investigate and potentially punish the two school districts that are openly defying the ban on school mask mandates signed by Republican Gov. Ron DeSantis.

The board, which consists of DeSantis appointees, voted unanimously in favor of taking enforcement action against the Alachua and Broward school districts.

Prior to the meeting, Florida Education Commissioner Richard Corcoran determined that there’s probable cause that the two school districts violated state law by imposing blanket mask mandates on students in public schools.

“Every school board member and every school superintendent have a duty to comply with the law, whether they agree with it or not,” Corcoran wrote in memos to the board regarding the two school districts.

The board’s enforcement authority stems from state law. The Aug. 17 vote authorized the board to adopt sanctions against the two school districts, which may include withholding funds or reporting the matter to the state legislature, according to Corcoran.

On July 30, DeSantis issued an executive order directing state agencies to come up with rules and actions to mitigate the spread of COVID-19 in schools. That executive order directed the agencies to ensure that the resulting protocols should be in line with the state’s Parents’ Bill of Rights, specifically in terms of protecting the parents’ right to decide whether their children should wear masks.

The Florida departments of health and education adopted an emergency rule on Aug. 6 in response to the governor’s order. The rule stated that “students may wear masks or facial coverings as a mitigation measure; however, the school must allow for a parent or legal guardian of the student to opt-out the student from wearing a face-covering or mask.”

The Alachua school district had already imposed a mask mandate on students on Aug. 4. When the rule was issued on Aug. 6, the school district released a notice stating that the mask mandate would remain in place for the first two weeks of school and that parents may only opt-out with a note signed by a medical professional, who is required to state that the student can’t wear a mask or face shield, to comply with the mandate.

The Broward school district, after several back-and-forth rounds, voted to defy the governor and to not follow the portion of the emergency rule that allowed parents to opt their children out of wearing masks.