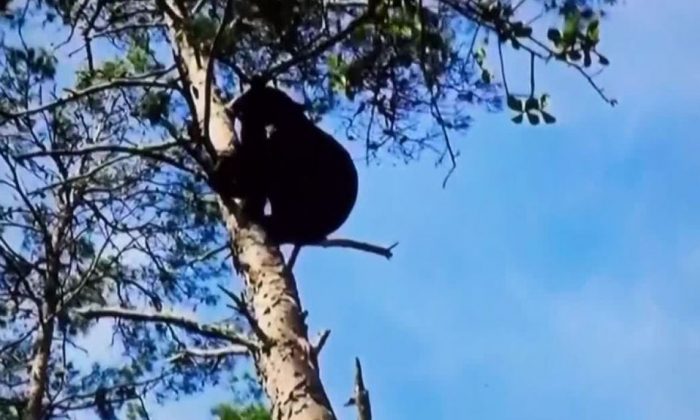 A still image from video footage and posted on social media shows a black bear in a tree. (Florida Fish and Wildlife Commission)
US

PUNTA GORDA, Fla.–The Florida Fish and Wildlife Conservation Commission released a report on June 23 showing that sheriff’s deputies disregarded FWC’s directive when they shot and killed a juvenile bear that “was no threat” and was “retreating” from the residential neighborhood in Palm Beach County.

The Palm Beach County Sheriff’s Office maintains its decision was based on public safety and traffic flow.

Arielle Callender, FWC Public Information Director for the South Region said in a released statement to The Epoch Times:

“FWC bear experts did not consider killing the bear since FWC law enforcement on (the) scene never observed any indication that the bear was a threat to public safety.”

Bear sightings in residential neighborhoods are not a cause for concern, she said, as the animals frequently roam in populated areas. This particular bear had “climbed a tree because it had a natural fear of humans and wanted to be away from people in the area.”

“A bear that is easily scared off by people is not a safety threat,” she wrote, adding that FWC officers on the scene had determined that the bear should “safely be allowed to leave on its own” because there were conservation lands nearby.

The report, however, indicates that the Palm Beach County Sheriff’s Office disregarded FWC’s request to allow the bear to leave the area.

“Shortly after I notified PBSO of the plan of action, a deputy asked me to move my marked FWC patrol vehicle. I asked them what was going on,” FWC officer Lonnie Brevik wrote in the report. “PBSO deputies on scene notified me that they were directed by their chain of command (COC) to shoot the juvenile Florida Black Bear when it came down from the tree. PBSO was notified of the FWC plan of action but failed to heed FWC’s direction.”

Brevik reiterated in his report that the deputies followed PBSO orders, and not FWC’s plan of action.

“PBSO was not authorized by FWC to kill the bear.”

PBSO released their incident report to The Epoch Times that reported their timeline of events.

The two deputies responsible for shooting the bear say in their report that they were “ordered by COC” to shoot it when it came down from the tree.

“I hear (my lieutenant) say ‘take the shot,’” the deputy wrote. “I then took the first shot striking the bear on the left side just under its shoulder causing it to hit the ground … and took a merciful shot so the bear did not suffer.”

The officers stated in the report they used 12-gauge shotguns to kill the bear. The bear was shot four times.

Teri Barbera, Media Relations Bureau Director for PBSO, told The Epoch Times in an emailed statement that PBSO made its decision based on public safety and traffic flow concerns.

“It should be noted that the bear had NO place to roam safely,” Barbera wrote on June 24. “The incident location and surrounding area are residential neighborhoods and fearing the bear would roam into the residential communities and/or impede traffic flow on the adjacent roadways PBSO was faced with making the decision to discharge their shotguns striking and killing the bear.”

The FWC report included photos of the location where the bear was shot. It appeared to be a wooded area near the subdivision.

“It’s a gross overreaction, and the death of an innocent animal that was simply scared,” she told the Epoch Times on June 24.

Budd said that FWC is a state enforcement agency and had jurisdiction over the bear, yet FWC directives went ignored by PBSO.

“They are the experts. They are the agency that needs to be relied upon, and law enforcement ignored them completely,” she said.

Jane West of 1,000 Friends of Florida agreed, adding that if a civilian had shot the bear, it would be a very different story.

“Had they been civilians unloading a 12 gauge, they’d be arrested,” she told the Epoch Times. “This is a threatened species. You’re not allowed to shoot black bears in Florida.”

According to their website, 1,000 Friends of Florida is a philanthropical effort that helps communities plan, educate, advocate, negotiate, and when necessary, litigate to protect Florida’s quality of life.

This incident is indicative of what happens when you have “sprawling growth,” West said.

“Residents that aren’t familiar with the Florida ecosystem resort to calling officers who then take the most violent methods available,” she said. “That is not how we are supposed to coexist with our ecosystem.”

Wildlife and native habitats alike are experiencing the fallout of encroachment, West said.

“When you have these human interactions, it does mean that you are encroaching on their habitat,” she said. “They’re experiencing significant habitat loss … and scavenge in dumpsters.”

“It’s really distressing and it’s just a reflection of what happens in controlled growth,” West continued. “In this state, there are no stop gaps and recognition for this incredible ecosystem that people are moving into.”

However, Budd believes that educating the public is the key to helping everyone understand bears as well as other native wildlife. She said it is possible for residents and businesses to coexist with wildlife—providing there is “balance and understanding.”

“We have a coexistence program and it’s based on the fact that we are developing our communities and our commercial business areas on wild land. We are going to have interactions with wildlife and that’s okay,” she said. “You can thrive with wildlife on a shared landscape—just be educated on wildlife behavior and how to react.”

When asked what would happen to PBSO for disregarding a state agency’s directive not to shoot a protected species, Callender said they would address it through “education.”

“We hope to work with PBSO to provide their staff with FWC bear response training and together ensure a more positive future outcome in situations like this,” she wrote in an emailed response.