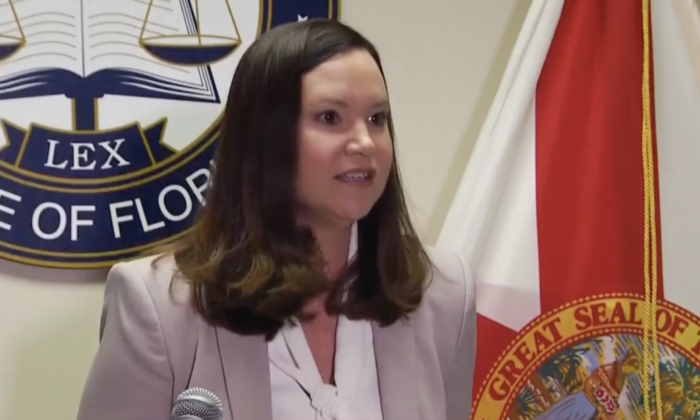 PUNTA GORDA, Fla.–Florida Attorney General Ashley Moody announced on May 5 that the state has reached a $683 million settlement with Walgreens over the drugstore chain’s role in the opioid crisis.

“After four weeks of the state putting on … evidence how Walgreens played a role in this epidemic … the white flag was raised, and we were able to begin negotiations in a productive manner,” Moody said. “Today is a culmination of that trial.”

The Walgreens settlement amount includes $620 million to be paid to the State of Florida over “the next two decades,” as well as a one-time payment of $63 million for attorneys’ fees.

As part of the settlement, there is no admission of wrongdoing or liability by Walgreens.

“The latest estimates show that Florida continues to lose 21 lives a day to opioid abuse,” Moody said at the Tampa press event. “With these funds, Florida goes on offense to stop addiction and save lives.”

Walgreens had opted for a jury trial—in which they were accused of contributing to Florida’s opioid addiction epidemic—that was set to begin on May 2. The pharmacy chain had initially chosen not to join a combined multimillion-dollar settlement with four other defendants.

Walgreens denied the state’s allegations of  “poor oversight” in its “dispensing and distributing opioids in Florida, allowing the drugs to be diverted to illegal use and causing an increase in addiction.”

In a written statement, Walgreens executive vice president and global chief legal officer Danielle Gray said the company will “remain focused” and “committed to being part of the solution.”

“(We) believe this resolution is in the best interest of all parties involved and the communities we serve across Florida,” Gray wrote. “Our pharmacists are dedicated healthcare professionals who live and work in the communities they serve and play a critical role in providing education and resources to help combat opioid misuse and abuse.”

In a press release, Walgreens listed their own actions to tackle and help prevent opioid addiction, including patient education on safe opioid use and making Naloxone, also known as NARCAN, an opioid overdose reversal medication, available at all of their stores nationwide. They also noted they will provide “safe and convenient” medication disposal kiosks at 1,400 stores along with other “safe disposal options.”

The company said it will make sure their pharmacists have the training they need to ensure they are dispensing prescriptions for a “legitimate medical purpose.”

Moody said at the press conference that the settlement funds will be used by the State of Florida to support its efforts to “combat and treat opioid addiction” and “help communities heal.”

Moody estimated that approximately “100,000 Americans overdosed and died from drug use” over a one-year period.

With funds from the settlement, “we go into battle armed and ready to fight back hard against this manmade crisis.”

Moody said the funds will go to counties that are “hardest hit” by the opioid crisis and will be disseminated through their “governing authorities” that will give them “autonomy to determine how they spend those funds.”

She also included the state legislature, the president of the Senate, and the speaker of the house among those who will have the “ability to decide how these funds are spent.”

Walgreens issued a statement that the “settlement is a result of unique facts and circumstances concerning the state of Florida. It should not be used to forecast or predict the value of any other litigation claims or future settlements and is unrelated to any other opioid-related litigation in which Walgreens is involved and which the company will continue to defend vigorously.”

According to the Walgreens website company information, it is included in the United States segment of Walgreens Boots Alliance, Inc. (Nasdaq: WBA). They described the company as an “integrated healthcare, pharmacy and retail leader serving millions of customers and patients every day, with a 170-year heritage of caring for communities.”