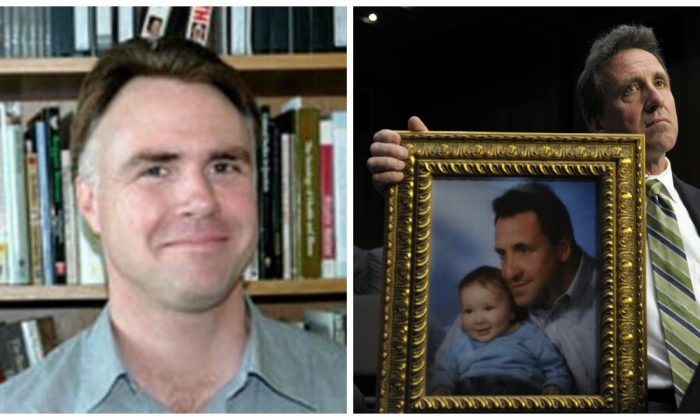 James Tracy, left; and Neil Heslin, the father of a six-year-old boy who was slain in the Sandy Hook massacre, right. (Florida Atlantic University; AP Photo/Susan Walsh)
US

Officials at Florida Atlantic University have recommended that professor James Tracy be fired because of his insistence that the Sandy Hook Elementary School shooting was staged.

The university informed Tracy on December 16, according to a statement. He has 10 days to appeal.

The parents of one the children who died at the shooting, 6-year-old Noah Pozner, started the process by demanding that Tracy be fired after allegedly harassing them and demanding they prove to him that their son died in the attack.

Veronique and Lenny Pozner wrote in the Forward that “Tracy is among those who have personally sought to cause our family pain and anguish by publicly demonizing our attempts to keep cherished photos of our slain son from falling into the hands of conspiracy theorists.”

“Tracy even sent us a certified letter demanding proof that Noah once lived, that we were his parents, and that we were the rightful owner of his photographic image. We found this so outrageous and unsettling that we filed a police report for harassment,” they added.

“Once Tracy realized we would not respond, he subjected us to ridicule and contempt on his blog, boasting to his readers that the ‘unfulfilled request’ was ‘noteworthy’ because we had used copyright claims to “thwart continued research of the Sandy Hook massacre event.”


Tracy originally wrote on his blog following the attack that it was staged.

He added in a December 13 response to a recent article about him that he and colleagues have “demonstrated beyond a reasonable doubt that the school had been closed by 2008, which means there were no children there for Adam Lanza to have shot.”

He alleged that the situation was a drill, and that the people such as the Pozners have made money by pretending their children died there.

Tracy describes himself on his blog as “a media scholar, educator, and political analyst.”

The Sandy Hook massacre refers to the attack on the school in Newton, Connecticut in 2012 that left 26 people, many of them children, dead.