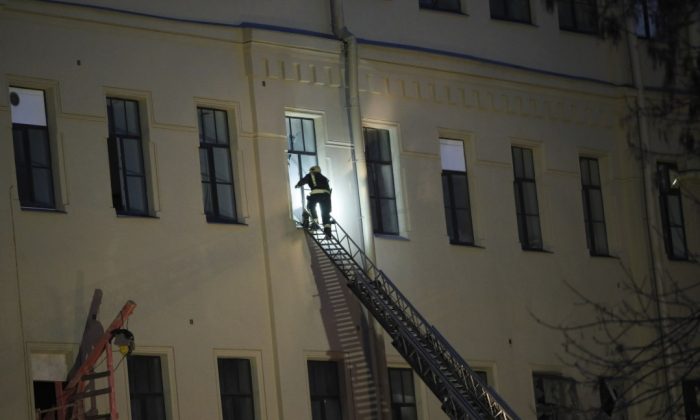 A Russian Emergency employee tries to get inside the collapsed building of the Saint Petersburg National Research University of Information Technologies, Mechanics and Optics in St. Petersburg, Russia, on Feb. 16, 2019. Russian emergency authorities say several floors of a university building in Russia's second-largest city have collapsed. (AP Photo/Dmitri Lovetsky)
International

Part of the roof and several floors of a university building in Russia’s second-largest city collapsed Saturday, but officials say there were no casualties.

The Emergencies Ministry said the collapse at the Saint Petersburg National Research University of Information Technologies, Mechanics and Optics took place as construction work was underway. An investigation into a criminal violation of construction safety has been opened.

St. Petersburg acting governor Alexander Beglov told journalists at the scene in the central city that 81 people were evacuated from the building.
“No victims, no injured,” he said.

He said about 20 of those evacuated were foreign students attending a weekend class.

Other images posted earlier on the same Twitter account show portions of the collapsed ceiling hanging down.

The school, known as ITMO University, is one of Russia’s national research universities.

Other buildings in the vicinity of the affected structure on the ITMO campus were not affected, ITMO News reported, citing no risk of collapse.

Classes in nearby buildings will take place as scheduled, according to the report.