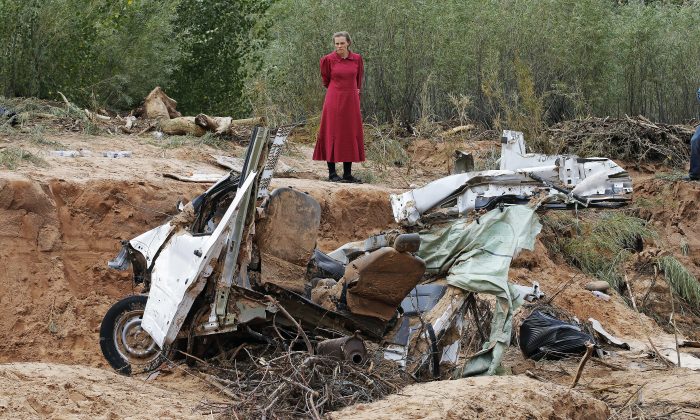 A woman looks at a damaged vehicle swept away during a flash flood Tuesday, Sept. 15, 2015, in Hildale, Utah. The floodwaters swept away vehicles in the Utah-Arizona border town, killing several people. (AP Photo/Rick Bowmer)
US

HILDALE, Utah—A van and SUV carrying three women and 13 children sat near the widening stream, waiting for the water to recede so they could cross back to their homes in a small, polygamous town on the Utah-Arizona border.

But in an instant, floodwaters engulfed them, and the two vehicles were sucked downstream, bobbing in the turbulent water before they tumbled over an embankment. Only three children survived. Twelve are dead. One is missing.

Virginia Black watched in horror from her house as she made a video of the once-in-a-century flash flood. “There goes the van!” Black says in a high-pitched voice. “It went over the thing. Oh, dear.”

Downstream, people rushed to where the vehicles came to a stop. One witness described a gruesome scene of body parts, twisted metal and a young boy who somehow survived.

“The little boy was standing there,” Yvonne Holm recalled. “He said, ‘Are you guys going to help me?'”

Some 20 miles to the north at Zion National Park, the same storm system sent flash floods coursing through a narrow slot canyon, killing four people and leaving three others missing. The group from California and Nevada in their 40s and 50s began their hike before officials closed the canyons that evening because of flood warnings, park spokeswoman Holly Baker said.

Flash floods are not uncommon in the area, but the volume and pace of Monday’s rain was a “100-year event” in Hildale, said Brian McInerney, hydrologist with the National Weather Service in Salt Lake City.

The height of the storm lasted about 30 minutes, pouring 1½ inches of rain into a desert-like landscape with little vegetation and steep slopes.

Monday’s weather event was like a bucket of water being poured onto a rock — it slid right off and began running downstream, picking up sediment to create the forceful, muddy mess that rushed through the city, McInerney said. Another half-inch of rain came within the hour.

Residents called it the worst flood in memory for the sister towns of Hildale, Utah, and Colorado City, Arizona, which is home base for Warren Jeff’s polygamous sect. The majority of the 7,700 people in the two communities are followers of Jeffs’ sect or have ties to polygamy.

The torrent was so fast, “it was taking concrete pillars and just throwing them down, just moving them like plastic,” said Lorin Holm, who called the storm the heaviest in the 58 years he’s lived in the community.

CoyLin Pipkin, 60, and her husband, John Barlow, could only watch from their cars as a white van carrying women and children swirled around in the fast-moving water and careened into a ravine.

“It is devastating,” Pipkin said Tuesday from her home.

Before they were swept away, she said she saw the three mothers standing outside their cars, watching the floodwaters, as many people in the community do when it rains. In this case, though, they had no idea about the water bearing down on them.

The women were returning from a visit to a nearby park, and it wasn’t clear if they were aware of the National Weather Service warnings: “Move to higher ground now. Act quickly to protect your life.”

“It was terrifying,” Black said. “They were getting washed away, and there was nothing I could do about it.”

Searches are expected to resume Wednesday in both Hildale, for the final missing person, and in Zion for the missing three hikers.