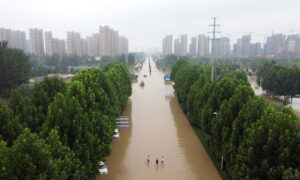 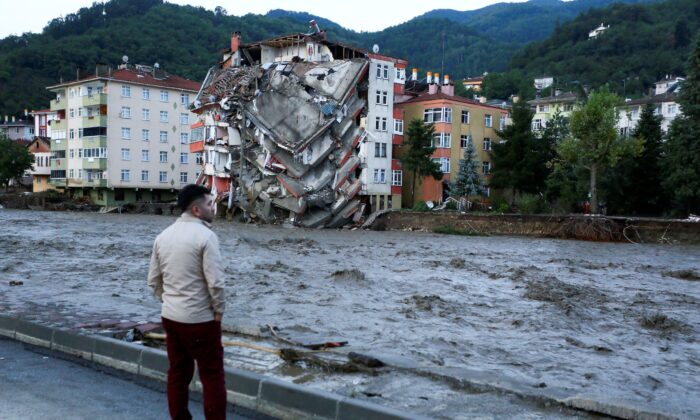 A man looks on as flood waters sweep by in Bozkurt town of Kastamonu province of Turkey, on Aug. 12, 2021. (IHA via AP)
World

ANKARA, Turkey—Turkish authorities said Thursday the death toll from the severe floods and mudslides that struck the north of the country has risen to 17, and one more person is still reported missing.

The floods battered the Black Sea coastal provinces of Bartin, Kastamonu, Sinop, and Samsun on Wednesday, demolishing homes and bridges, and sweeping away cars. Helicopters scrambled to rescue people stranded on rooftops.

As floodwaters began to recede across the affected regions in Turkey’s north, a statement from the Disaster and Emergency Management Presidency, or AFAD, said rescuers had recovered six bodies in Kastamonu.

Later Thursday, nine more bodies were found in the worst-hit town of Bozkurt, in Kastamonu, and two bodies was found in Sinop. An 80-year-old woman was reported missing in Bartin province.

President Recep Tayyip Erdogan issued a message of condolences for the 17 victims and said his ruling party was postponing Saturday’s celebrations for the 20th anniversary of its founding due to the “disasters we lived through in the past days.”

Floodwaters inundated much of Bozkurt. One building collapsed and a second building was damaged in the town, the state-run Anadolu Agency reported. In Bartin province, at least 13 people were injured when a section of a bridge caved in.

The military said its helicopters airlifted 80 people to safety in the region. Overall, more than 1,400 people were evacuated to safe areas, and hundreds were being housed in student dormitories, AFAD said.

Hundreds of villages in the affected areas were left without power and several roads were blocked.