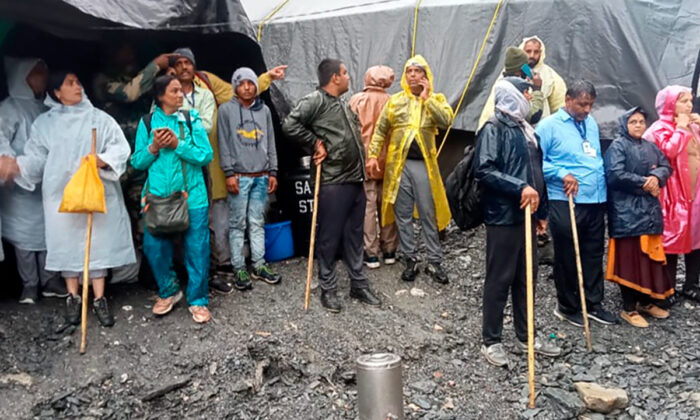 Hindu devotees are stranded after a cloudburst near the base camp of the cave shrine of Amarnath in south of Kashmir Himalayas, in India, on July 8, 2022. (Jammu and Kashmir Government's Department of Disaster Management via AP)
Asia & Pacific

Officials said in addition to the deaths, at least three dozen people were missing while an unspecified number of injured devotees were airlifted to hospitals for treatment. Authorities rushed several teams of doctors and paramedics to the rugged area and were administering first aid to the injured.

The heavy rain Friday evening near the mountain cave revered by Hindus sent a wall of water down a gorge and swept away about two dozen camps and two makeshift kitchens, officials said. An estimated 10,000 people were in the mountains when the rains struck.

India Prime Minister Narendra Modi expressed anguish over the deaths and said in a tweet that “all possible assistance is being provided to the affected.”

Hundreds of pilgrims have died in the past due to exhaustion and exposure to harsh weather during the journey through the icy mountains. In 1996, thousands of people were caught in a freak snowstorm during their trek, leading to more than 250 fatalities.