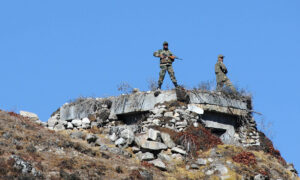 Flooding, landslides, and torrential rain in Kerala, India, have killed at least 79 people and left tens of thousands stranded in what has become the worst monsoon in almost a century.

The Indian Meteorological Department has forecast heavy to very heavy rain in the state until Saturday, and it has issued a “red alert” for 12 out of its 14 districts.

According to the Times of India, 12 deaths were reported on Aug. 16, pushing the death toll up to 79.

The Prime Minister of India, Narendra Modi, said he asked the defense ministry to step up relief and rescue operations in the state.

“Praying for the safety and well-being of the people of Kerala,” he wrote in a tweet.

Spoke to Kerala CM Shri Pinarayi Vijayan again this morning. We discussed the flood situation in the state. Have asked Defence Ministry to further step up the rescue and relief operations across the state. Praying for the safety and well-being of the people of Kerala. @CMOKerala

The state last saw such devastating flooding in 1924.

Tourists, who visit the state for its scenic waters and coastline, have been warned to avoid several popular destinations affected by the flooding.

According to the Kerala State Disaster Management Authority, 31,000 people have been forced to take shelter in rescue camps and crops on 1,031 hectares (2547.66 acres) have been damaged. Over 50 teams have been deployed to rescue stranded people.

Authorities have released water from 35 of its 39 dams to prevent dangerous breaches, according to The Indian Express.

Krishna Jayan, 58, told the BBC she was woken up by her friends.

“I opened the door and water gushed in,” she said. “When we stepped into the street, we were neck-deep in water.”

Kochi Metro Rail had to suspend its operations due to the rise in water and operations at the Cochin International Airport have been suspended due to flooding.

Chief Minister of India’s flood-ravaged Kerala state, Pinarayi Vijayan said on Aug. 16 that 256 people had died due to rain, flood, and landslide in the tourist state since May 29.

Vijayan said that all boats, including fishing boats, would be used to rescue people stranded in their homes.