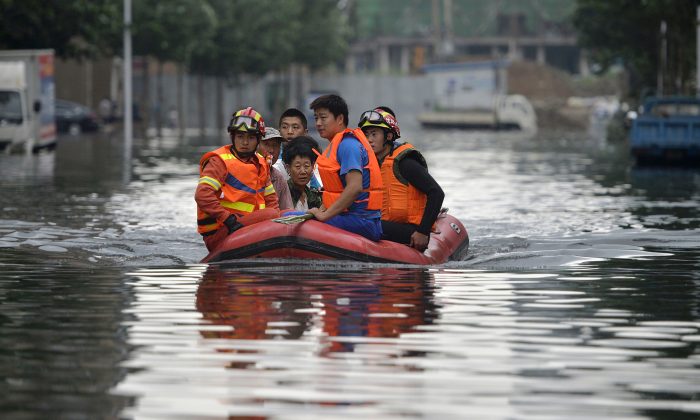 Rescuers use a raft to transport people along a flooded street in Shenyang in northeastern China's Liaoning Province on July 21, 2016. (Chinatopix Via AP)
China

BEIJING—Torrential rains that have swept through China have killed at least 154 people and left 124 missing, officials said Saturday, with most of the casualties reported from a northern province where villagers complained about lack of warning before a deadly flash flood.

The rains, which began on Monday, have flooded streams, triggered landslides and destroyed homes across the country. Most of the fatalities were reported in the northern province of Hebei, where the provincial Department of Civil Affairs said 114 people were killed and 111 others were missing.

More than 300,000 people were evacuated in Hebei, and the province made another round of appropriations of tents, blankets, rain boots and generators, the department said.

In the Hebei city of Xingtai alone, 25 people were killed and another 13 were missing.

The Xingtai village of Daxian was swamped by a flash flood early Wednesday as residents were asleep. Eight people, including three children, were killed and another was missing in the flood, according to the Xingtai government.

But the tragedy did not surface until Friday, when accounts, purportedly by local residents, began surfacing on Chinese social media of angry villagers blocking roads, accusing the local authorities of failing to notify them in time for evacuation when an upstream reservoir discharged the floodwaters.

The online posts — accompanied by photos of drowned victims — also accused local officials of covering up the tragedy by lying about having no deaths in the area. State media later confirmed that a local official had said Wednesday afternoon that the flash flood caused no fatalities.

Some of the accompanying photos showed images of apparently drowned children lying in mud, their bodies swollen and their skin pale. In another photo, local villagers and an official knelt before each other, with state media reporting that the official was trying to console the grieving family members.

Although removed from social media by Saturday morning — apparently by censors — the postings had already caused a national uproar, with members of the public demanding accountability from local authorities. Chinese journalists rushed to the village Friday night and reported on the disaster.

On Saturday night, Xingtai Mayor Dong Xiaoyu made a public apology and bowed at a news conference for the mishandling of the flash flood. He said that the danger of the flood was underestimated, and that local officials erred in failing to confirm and report casualties in a timely and accurate fashion. He promised a thorough investigation and to hold negligent officials responsible.

Authorities blamed extraordinary rainfall and a failure of a river levee near the village for the sudden water surge. Local media reported that the river channel is particularly narrow near the village of Daxian and has been blocked by pipes from a heating utility, as well as mud.

Qiu Wenshuang, a vice mayor of Xingtai, said Saturday that the flood was sudden and that the village was already flooded when officials arrived there to evacuate residents on Wednesday morning, according to state media reports.