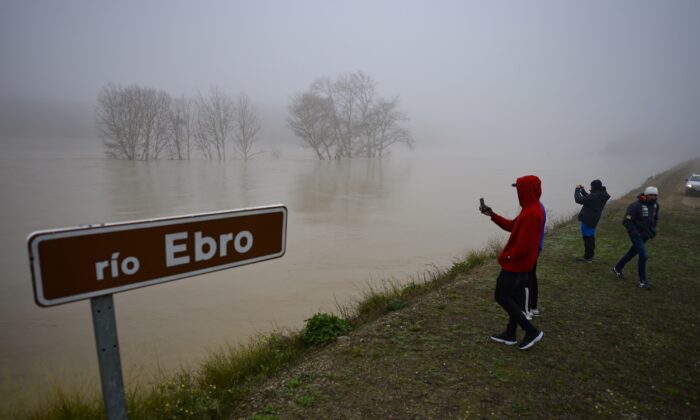 People stand beside the border of flooded area near the Ebro River, in the small village of Pradilla de Ebro, Aragon province, northern Spain, on Dec. 13, 2021. (Alvaro Barrientos/AP Photo)
Europe

MADRID—More than 50 people were evacuated Monday from areas in northern Spain hit by record flooding following heavy rain and snowfall.

Spanish authorities blamed the flooding of swollen rivers for the deaths of at least two people since Friday, and the regions of Navarra and Aragón remained under severe weather warnings.

In Novillas, a village of 520 near the borders of both regions, local authorities ordered the evacuation of 55 residents as the Ebro River overflowed. The river’s water level had swelled up to 8.5 meters (27 feet) in some areas, breaking a record set during flooding six years ago.

In the Aragon region’s capital, Zaragoza, authorities prepared for floodwaters to hit the city of 680,000 on Tuesday. Upstream, in Navarra, an area known for its vegetable crops, residents appraised their flood-related losses.

The combination of a heavy, dayslong storm and thawing snow brought a surge in the Ebro River and its tributaries, Spanish meteorological services said.

Spanish Prime Minister Pedro Sánchez on Monday announced that the Cabinet would issue a “catastrophic zone” declaration that frees special emergency funds for the areas affected by the storms.