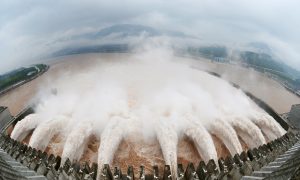 By Aug. 14, Yangtze River Basin’s monsoon season had lasted 64 days, the longest in the past 60 years, according to Chinese meteorological authorities.

The fourth flood peak of the Yangtze River is expected to arrive at the Three Gorges Dam in the morning of Aug.15, as torrential rains have ravaged the upper reaches of the Yangtze River in Sichuan Province since Aug. 10. Many cities in the province are inundated. In the worst-hit area, water has risen to the second floor.

So far, about 100,000 residents have been affected by flooding in 14 rivers across the province.