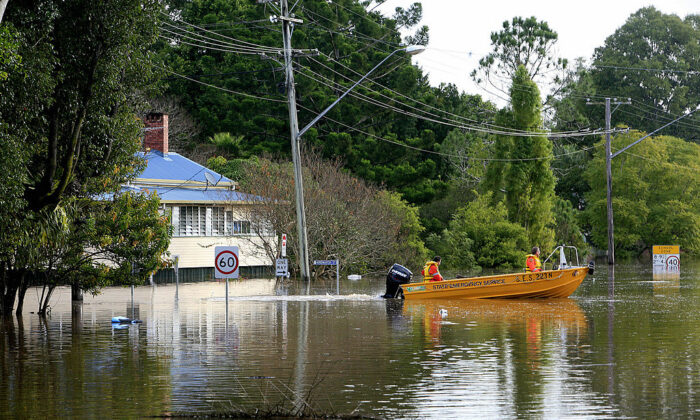 The northern regions of New South Wales are experiencing some of the worst flooding ever recorded with river levees overtopped and evacuation orders in place in many areas as the Bureau of Meteorology (BOM) warns it may get worse as the week continues.

This comes as a slow-moving coastal trough extending from southern Queensland into northern NSW is bringing heavy rain to the north of the state and pushing multiple rivers to their limits, including the Wilson, Tweed, Richmond, Clarence, and Orara.

BOM reported on Monday that the Wilson River levee in the town of Lismore was breached early on Monday morning, with flooding exceeding the highest record levels of March 1974 and February 1954.

State Emergency Services (SES) have issued an evacuation order for residents of North and South Lismore, as well as Lismore CBD, low-lying areas of East Lismore, and Girards Hill.

Nine News reported that the highway into Lismore is completely flooded, and SES have called on residents to get their boats out to ferry people out of town.

SES has received calls of people stuck on verandahs and roofs, and one resident said it’s the worst flooding he’s ever seen in the town.

“I’ve been through probably 15 floods, I’ve never seen anything like this,” he said.

Evacuation orders have also been issued for Murwillumbah CBD and low-lying areas, as the Tweed River level climbs to six metres, and for low lying areas of Bushgrove and Cowper, near Grafton, as the Clarence River continues to rise.

Once floodwaters rise above 6.1 metres on the Murwillumbah gauge, all access routes from the town will be closed, while topping 3.9 metres on the Bushgrove gauge will mean roads will begin to close at Bushgrove and Cowper.

Like the Wilson River, the Richmond River is expected to exceed the 1974 peak in multiple locations.

Heavy rain continued to fall over the Richmond River on Monday morning, causing major flooding at Kyogle, Coraki, and Bungawalbyn, with moderate flooding at Casino and Woodburn.

However, river levels at the latter two locations are expected to rise through Monday, meaning flooding may worsen.

The intense rainfall will likely continue over the next two days as a low pressure system is expected to form off the northern NSW coast on Tuesday before moving south to the Mid North Coast and deepening into an East Coast Low.

SES have issued a Severe Weather Warning for heavy to locally intense rainfall in the Northern Rivers, parts of the Mid North Coast, and Northern Tablelands.

Meanwhile, the southern end of the low will affect Sydney, Illawarra, and the South Coast on Tuesday and Wednesday, bringing heavy to torrential rain.