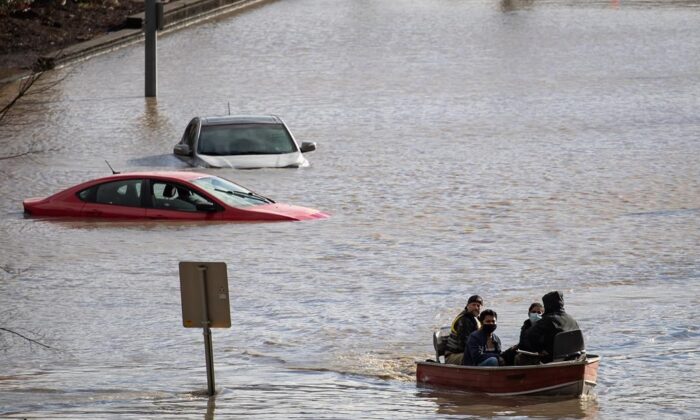 People who were stranded by high water due to flooding are rescued by a volunteer operating a boat in Abbotsford, B.C., November 16, 2021. (The Canadian Press/Darryl Dyck)
Canada

Flooding, Mudslides Prompt BC Government to Impose State of Emergency

VANCOUVER—British Columbia has declared a state of emergency following unprecedented flooding that has displaced residents, severed access to multiple highways and killed livestock.

B.C. Premier John Horgan declared the state of emergency, saying it will help preserve basic access to services and supplies for communities across the province.

He says the government will bring in travel restrictions to ensure that essential goods and medical and emergency services are able to reach the communities that need them.

Horgan asked residents not to hoard items, saying what people need is what their neighbours need as well.

Every major route between the B.C. Lower Mainland and the Interior was severed by flooding, washouts or mudslides when record-setting rain swamped the south coast.

Agriculture Minister Lana Popham says thousands of animals have died and the province is rushing to get veterinarians to other animals that are in danger of dying.

She says desperate farmers whose properties were flooded tried to move their animals by boat but some had to be abandoned and even those who were ferried out of barns are in poor health.

“I can also tell you that many farmers attempted to move animals and then had to walk away because the roads were disappearing beneath them,” she said.