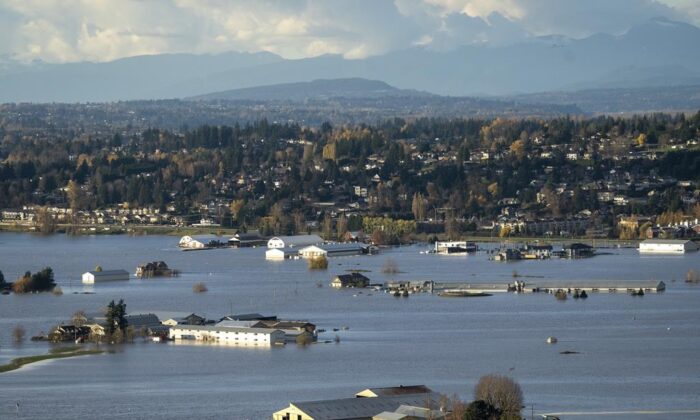 Flooding in BC ‘Testing the Resilience’ of Dairy Farmers, Says Association

The mayor of Abbotsford says he does not know how many farm animals may have been lost as floodwaters washed over one of British Columbia’s prime agricultural areas.

“We have no numbers. There’s a lot of birds out there too. I saw barns that looked like they were half full of water. I can’t imagine that there are any birds left alive, but we don’t have those numbers,” Mayor Henry Braun said Wednesday.

Dairy and chicken farms cover the Sumas Prairie area of Abbotsford, the same location that residents in 1,000 properties were told to evacuate on Tuesday.

Farmers spent hours Tuesday working to transport their animals to safety, in some cases relying on boats and other watercraft.

Braun said he watched farmers trudge through water that was 1.5 metres deep to get the livestock out.

The situation grew more frantic Tuesday night when it appeared a crucial water pump station would be overwhelmed. Braun urged those farmers who had ignored the evacuation order to leave their animals and get out.

By Wednesday, the pump station had been surrounded by sandbags and Braun said he felt better about the situation.

The flooding situation in parts of southern British Columbia has forced farmers to lean on each other to save their animals, says the chair of the board for the BC Dairy Association.

Holger Schwichtenberg said he was not yet sure how many farmers were working to move their milking cows, but in such situations, they would reach out for help to get their animals off-site.

He said 25 to 30 cows were being transported to his own farm in Agassiz on Tuesday from another farm in the Fraser Valley, east of Vancouver.

“This is an example of an industry coming together when things really get ugly,” Schwichtenberg said. “We’re doing the best that we can with the situation that we’ve been handed and it’s a tough one.”

Moving livestock is time consuming and stressful for the animals and people involved.

“You’ve got trucks, you’ve got neighbours, you’ve got whoever’s got a pickup truck or something to haul cattle in and you start moving them to higher ground or you’ve made arrangements to get them off-site,” Schwichtenberg said.

Braun said Tuesday watching farmers work to save their animals was “heartbreaking.”

The mayor said he’s also concerned that livestock feed could run out.

“We have thousands and thousands of dairy cows on that prairie.”

Schwichtenberg had yet to hear of any losses of animals, but he said this week’s flooding has put a strain on the industry, which is still reeling from a disastrous summer.

“We had a long, hot summer, we had a very poor growing season unless you had irrigation, the ongoing effects of COVID, and now we have this situation,” he said.

“It’s testing the resilience of dairy farmers, that’s for sure.”