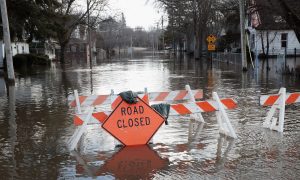 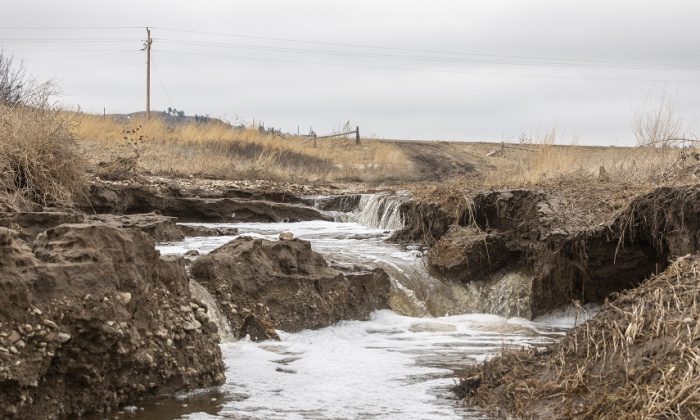 Record-breaking flooding has forced dozens of people on a South Dakota reservation to evacuate, and ranchers were working March 28 to get their livestock to higher ground while waiting for a river to crest.

High water from the Moreau River is threatening about 50 residences in an eight-mile stretch between White Horse and Thomas in north-central South Dakota, said Cheyenne River Sioux Tribe spokesman Remi Bald Eagle. He said about half a dozen people were rescued by helicopter; no injuries have been reported.

The tribe has asked others to voluntarily evacuate, although some residents are refusing to leave because their cattle are trapped by flooding.

“Everybody is afraid that their livelihoods are going to be swept up by the water,” Bald Eagle said. “It is really a critical time for the livestock folks because right now, their cattle are all calving.”

The reservation has deployed 20,000 sandbags and a Pennington County rescue team is on hand if needed.

The National Weather Service said the worst appears to be over. The river has been as high as 28 feet, or eight feet above flood stage. It stood at about 23 feet on the morning of March 28 and is expected to crest at 24 feet over the weekend, South Dakota meteorologist Jeff Chapman said.

On the Pine Ridge Reservation in southern South Dakota, the Oglala Sioux tribe is transitioning into recovery mode after flooding swamped roads, trapped people in homes, and cut off water supplies to thousands.

“A lot of people lost their homes,” said state Rep. Peri Pourier, who is executive director of the Pine Ridge Reservation Emergency Relief nonprofit. “It’s going to be a big recovery effort—getting the manpower, the materials, and resources to help recover.”

Elsewhere, meteorologists in Montana said a spring storm that is bringing rain and snow may lead to additional flooding, as the runoff flows into rivers and streams already swollen with snowmelt. And North Dakota Gov. Doug Burgum declared a statewide flood emergency after touring inundated homes in the western part of the state on March 27.

Rain is expected to prolong the flood fight along the swollen Missouri River, creating a second crest east of Kansas City, Missouri.