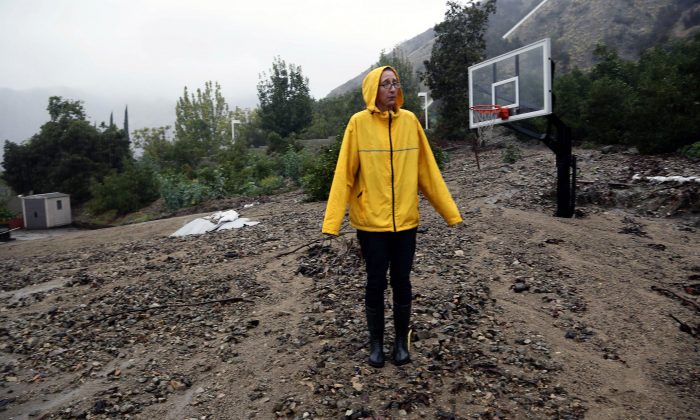 Homeowner Amanda Heinlein stands on a mud landslide covering a basketball court near her house in Azusa, Calif., Friday, Dec. 12, 2014. A soaking storm swept into California, causing several mudslides, flooding streets and cutting power to tens of thousands Friday after lashing the rest of the state with much-needed rain. (AP Photo/Nick Ut)
US

LOS ANGELES—A Pacific storm hit Southern California with heavy rains and wind on Friday, triggering flash floods and mudslides. Hundreds of homes were under evacuation orders, and more than a dozen houses were damaged.

The rain came as part of a storm from Hawaii that has been called a “Pineapple Express” and has affected the whole West Coast.

All across Los Angeles County the rains caused areas of flooding, road closures, and traffic build-ups.

About 1,000 homes were given evacuation orders on Thursday night in the northeast Los Angeles suburb of Glendora, where mudslides from a wildfire-burned area left several roads impassable overnight. At least a dozen were red-tagged as uninhabitable. Flowing mud and rocks also threatened homes in Azusa to the east of Glendora.

Los Angeles firefighters were called in shortly before 10:00 am near Atwater Village area to rescue two homeless people who were stranded in trees on an island in the swollen Los Angeles River. Both were safely pulled out of the water and taken for medical treatment.

High winds tore down power lines throughout the region, leaving about 22,000 in Los Angeles County without electricity by mid afternoon, utility officials reported.

Charlene Casillas, a resident of Los Angeles suburb of Monrovia, and many of her neighbors received an alert on their cell phones early Friday morning warning of dangerous weather.

“This morning the rain got pretty heavy,” said Casillas, who said the alert warned of mudslides. “We waited until this morning to come out and see that we had some mud that had broken through our barriers.”

Casillas said she was lucky that she only had mud flow into the front area of her property near the street, but some of her neighbors were not so lucky.

The houses along her street are just south of the burned area of the Madison Fire of April 2013. Fires destroy trees and brush that help prevent against erosion and mudslides, and city officials placed large white barriers along the street after the fire to protect the homes. Sandbags were stacked high alongside and between them in preparation for Friday’s rain.

For Casillas though, she says this is the price you pay for living in the foothills of Southern California.

“We’ve lived up here for a while,” said Casillas. “We kind of were prepared for it, so we understand. With the beauty being up here in Monrovia, there comes other things with it – fires, rains, and that’s ok.”

The “Pineapple Express” phenomena refers to a long, narrow stream of moisture from the tropics that travels into the western United States.

The latest forecast from the National Weather Service is that the storm will continue to leave rain in warmer areas along the West Coast and snow in higher, mountainous regions over the weekend. As it moves inland, strong winds, rain and snow are expected in some western states.