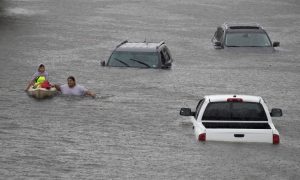 A pedestrian makes their way across an overpass under a dramatic sunrise during the early morning commute in Los Angeles on , on Feb. 1, 2019. (AP Photo/Richard Vogel)
US News

The storm that began moving in Friday night was expected to bring up to 4 inches of rain in some areas, winds gusting to 80 mph in the mountains, 10-foot waves and several feet of snow in the Sierra Nevada and other mountain ranges.

The National Weather Service issued a flash-flood watch through Saturday morning for the entire San Francisco Bay Area and much of the Central Coast.

“Heavy rainfall over a short amount of time will likely overwhelm storm drains and result in flooding of low-lying urban areas. Also, expect rapid rises on small streams and creeks” which could overflow, the weather service warned.

Evacuations were ordered or recommended for many areas of Northern and Southern California that were hit by wildfires in recent months. Authorities fear that an inch of rain an hour could send fire debris, mud and boulders sluicing down denuded hillsides.

In Malibu, where a fire last year destroyed many homes, Vidette Bell had her front door and garage barricaded with sandbags even before a previous storm hit.

“I paid $3,000 to have these sandbags delivered,” Bell told KCAL-TV on Friday. “I didn’t want to have my house survive a fire and then get invaded with mud.”

In the Holy Jim fire area southeast of Los Angeles, where an August wildfire scoured tens of thousands of acres in the Cleveland National Forest, volunteers using heavy equipment removed debris and deepened a creek bed to help prevent flooding.

The strongest West Coast storm of the season so far will batter California with heavy rain and damaging winds this weekend. Timing and impacts: https://t.co/OzphRekGrk pic.twitter.com/LKwFOiSJXr

“In the last two days we’ve been able to move 19 dump trucks worth of debris from the creek bed and reinforce some of the walls here,” Keith Kothlow of Team Rubicon, a veteran-led disaster response organization, told KABC-TV.

It has only been a little over a year since a downpour on the huge Thomas Fire burn scar unleashed a massive debris flow that destroyed or damaged hundreds of homes in the seaside community of Montecito.

The disaster killed 21 people, and two others have never been found.

The weather service issued flash-flood watches for areas burned by the Mendocino Complex, Camp and Carr wildfires in Northern California.

Winter storm warnings went into effect in the Sierra Nevada along with avalanche warnings on the Nevada side of the range. The Sierra is already loaded with snow from a series of storms in January. The weather service said areas could see accumulations of up to 10 feet over the next few days as a series of storms blew through.

Numerous areas of the state were under warnings for high winds, some that could potentially knock down trees and power lines.