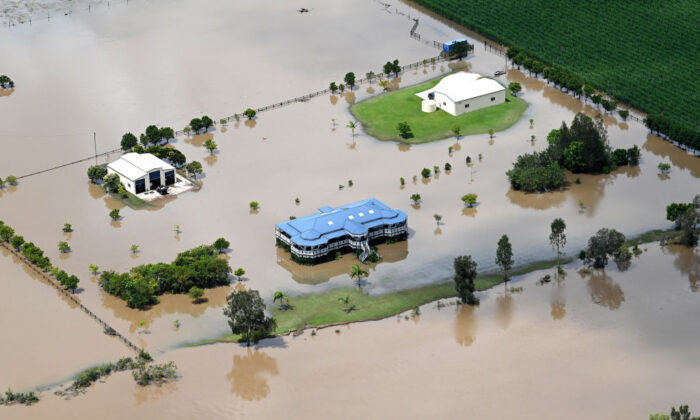 In an aerial view, a farm house is seen surrounded by floodwaters in the town of Yandina on the Sunshine Coast, Queensland Australia, on Feb. 27, 2022. (Bradley Kanaris/Getty Images)
Australia

Stressful and exhausted farmers in the north of New South Wales (NSW) are asking the state government for assistance as they continue to suffer the impacts of the flood crisis.

Dugald Saunders, the NSW minister for agriculture, said the state government had included fodder drops, vet assessments and disposal of dead stock in the list of priorities.

During his speech at the NSW State Emergency Control Centre for the Department of Primary Industries on March 8, the minister said that flood-affected farmers could immediately get access to a support amount of $15,000 (US$10,900).

However, there has been criticism that the NSW government’s efforts in organising support for impacted farmers were not effective enough.

According to NSW Farmers Dairy Chair Colin Thompson, farmers in need of help only had limited resources available to them.

“It’s now been more than a week, and these farmers are exhausted, and they’re just not seeing enough physical help on the ground,” he told AAP.

Lismore dairy farmer Leigh Shearman said no one but farmers were there to help each other.

“The stress level is huge. We’re all doing our best to help each other,” she said.

Shearman told AAP she had not received any support from the NSW government and had already arranged for the disposal of her dead animals.

“I don’t know what the government could do… it’s just some phenomenal thing that happened. We had two floods before this flood. Everything was waterlogged,” she said.

With the phone just restored to her property on the night of March 7, Shearman said the government so far had not even rung her to ask if she needed help.

She said it would be a very significant help to the region if the devastated town of Lismore was able to return to normal.

“That will support the farmers if they get the town up and running as soon as they can because we can’t buy anything … I wanted a tractor tyre fixed, and the young bloke had to take it to Ballina,” she told AAP.

The dairy farmer also said that the grants of up to $75,000 available to primary producers from the government would be a great assistance.

More than 800 NSW farmers have reached out to the state government for help, and so far, flood-hit farms have received over one million kilograms (2.2 million pounds) of fodder.

The state government still carries out surveillance flights around the region to search for missing stock as the number of dead animals has reached at least 600.

“Where there are animals that are … isolated, and sometimes it is in the middle of nowhere, fodder is being taken to them as quickly as possible,” said Saunders.